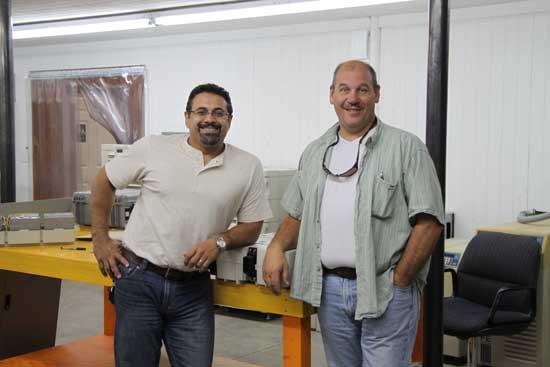 Marc Saracho, left and David White at in TSS's Readyville warehouse.
Alternative power technology is maturing to the point where widespread adoption is becoming practical and affordable. Where previously the necessary equipment and expertise were prohibitively expensive for many applications, more and more businesses and individuals will soon find that these new technologies can actually decrease their net energy cost when applied properly. At least one business in Cannon County intends to be on the forefront of this booming market.

Titan Specialized Services in Readyville provides critical power services to a variety of clientele throughout the United States. Uninterruptible power supplies, or UPS, are necessary for any operation that is unable to withstand a power outage -- hospitals, data centers, military, etc. Titan’s primary role is managing these materials in their warehouse and scheduling work for their engineers throughout the country.

DASH began four years ago as a subsidiary of TSS originally focused on monitoring of watersheds, rivergauging, and other environmental work. Contracts in Alaska presented DASH with the opportunity to work with some off-the-grid energy demands from remote lodges and facilities where hard-wired power is unavailable, prohibitively expensive, or drastically inefficient. Recognizing the demand for such services and already having the expertise, resources, and contacts in place throughout the United States, DASH became an alternative energy provider.

As practical application of these technologies became more widespread, DASH and TSS began to establish a more consumer-oriented brand for their services -- The Solar Wind Store. The Solar Wind Store will allow customers to explore their alternative energy options both in brick-and-mortar shops and through the website thesolarwindstore.com.

“It’s still a mystery to a lot of people,” says TSS Director of Engineering David White, “they know they want it but they don’t really understand how it works.” TSS are hoping to change this with the Solar Wind Store.

Three retail locations will exist to serve customers; one will be in Alaska, one in New Mexico, and one here in Middle Tennesse. The SWS’s stores and services in the lower 48 will be stocked out of a warehouse in Cannon County with supplies and materials coming from overseas, throughout the US, and locally whenever possible. “There are aspects of manufacturing that can be done cost effectively locally and those things should be done locally,” [other guy] says.

The Solar Wind Store will create new jobs in Cannon County. Construction of an additional 30-50,000 sq. ft. warehouse is planned for next year and they hope to bring some light industrial manufacturing to the area before 2010’s end. There will also be 2-3 installation crews as well as positions in the warehouse and offices, amounting to about 50 or so good jobs. Their emphasis on using local labor and services whenever possible also means contracts for businesses in and around Cannon County.

One barrier to widespread application of alternative energy technology has been the complexity of the systems and the lack of readily available expertise. This has restricted residential adoption almost exclusively to tinkerers and techies. The Solar Wind Store will offer customers a complete turnkey solution, from selecting an appropriate system for their needs, through installation, and continuing maintenance.

In many energy markets, especially those supplying beyond capacity, utility companies will pay customers for running their meters backwards -- for feeding the grid with the energy they produce. Often these payments are made at a premium price. The reason for this practice is that America’s aging energy grid is inefficient and exhausted in many markets. Nationally, we produce around 42 quadrillion BTUs of electric power per year. However, all transfer of electric current involves resistance or loss and we only actually use around 13 quadrillion BTUs. That is a 68% loss. The nature of large, centralized power production and enormous distribution networks makes this kind of loss unavoidable. In addition, much of the energy lost is produced at high environmental cost in terms of carbon emissions, etc. The answer to this problem is moving to decentralized power from renewable sources.

Can America meet its energy needs in the 21st century? Can we reduce our dependence on harmful fossil fuels that come from volatile regions? Business Manager Marc Saracho is hopeful that we can. “No one is more innovative than Americans -- once we put our minds to something there’s no stopping us.”

The Solar Wind Store plans to have a soft launch of its website in early November with a Grand Opening celebration at the Readyville site sometime later in the month.