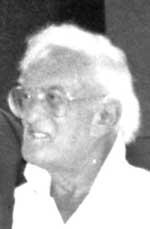 BERGER
Sol Berger, 98, founder of Colonial Corporation of America with headquarters in Woodbury, died Saturday, July 25 2009 at his home in Scarsdale, New York.

At age 36 Mr. Berger moved to Woodbury opened a shirt factory in 1947.

Sol Berger’s presence in Woodbury and Cannon County has had a profound impact on the economic development of this area. Until Colonial Corporation of America was established and the shirt factory opened in early 1947 few opportunities for employment existed for our people. The company had humble beginnings. Members of the Woodbury Lions Club and other interested citizens signed a note making the first payroll of the shirt factory possible. Of course that note was paid in due time by Mr. Berger.

From that small beginning the company grew and grew to become the premier shirt manufacturing company in America. The new factory occupied a building built by the county on the lot now occupied by the new Woodbury Grammar School. Annual rental reimbursed the county for the cost of this and all additions to the factory.

The sewing operation started with only a few employees. The business grew rapidly. Soon the building was too small to house the operation and an addition was built. Then another, and yet another until Colonial Corporation of America employed more than 2,200 people in the plant here in Woodbury, (equal to the total population of Woodbury) plus 150 employees in the factory that had been built in Auburntown. Other plants were opened in other towns around the southland until Colonial Corporation of America operated more than 20 plants around the southland.

It is estimated that Mr. Berger was directly responsible for pumping approximately $200 million into the economy of Cannon County in the form of payroll checks alone. In today’s dollars, that would amount to more than $200 billion. This made it possible for one to see new washing machines on the front porches of homes in every section of the county in the late 1940s and early 1950s. Later we saw new homes, shiny new cars and pickup trucks everywhere. Television antennae were growing from every rooftop. Inside plumbing, add-on rooms and new appliances and new furniture were enjoyed in almost every home.

The Bergers, Sol and his wife Marley with their two daughters Renee and Sandye (Sandye was born in Woodbury) lived at the end of College Street across from the old high school. They moved to New York when his business demanded his presence in his sales offices there.

Mr. Berger, accompanied by his daughters and grandchildren, came to Woodbury in September 1995 for a Sol Berger Homecoming celebration. He profusely thanked the hundreds of former employees who gathered to pay him honor and to thank him for making it possible for them to have a place to work. The most wonderful days of our lives were the years we spent living in Woodbury, he told the group. He spoke peraonally to many former employees, remembering most of their names even after all those years.

Remembered as a warm, friendly man, Mr. Berger was a generous supporter of various programs and projects in Woodbury and Cannon County. He was a great admirer and friend of Dr. J. F. Adams. At the end of the funeral service for Dr. Adams Mr. Berger asked Austin Jennings for ideas for an appropriate memorial honor Dr. Adams. A public library building was discussed and later a group of members of the Woodbury Lions Club and other interested business and professional men met at the office of attorney Hoyt Bryson and formed the Dr. and Mrs. J. F. Adams Memorial Library Association.

When the fundraising stalled and additional funds were need to complete project, Mr. Berger made it possible for the building to be completed along with the help of Bank of Commerce.

The Berger family has made numerous generous contributions to the Dr. and Mrs. J. F. Adams Memorial Library Association endowment fund to assure adequate funds for maintaining and improving the library building. The county public library occupies the building at no cost to the count y or city.

Mr. Berger and his family made significant contributions to the Arts Center of Cannon County. The Marley Berger Gallery and the electric sign at the arts center was made possible by a generous gift from her family.

Sol’s wife Marley died several years ago. He is survived by his daughters, Sandye and Renee as well as grandchildren.

It is hoped that everyone who has any memory of Mr. Berger or has family that was effected by his presence here would write a card to the family expressing their appreciation for his life and mourning his death.

Such cards and letters may be sent to The Sol Berger Family, 2 Cooper Road, scarsdale, NY 10583.