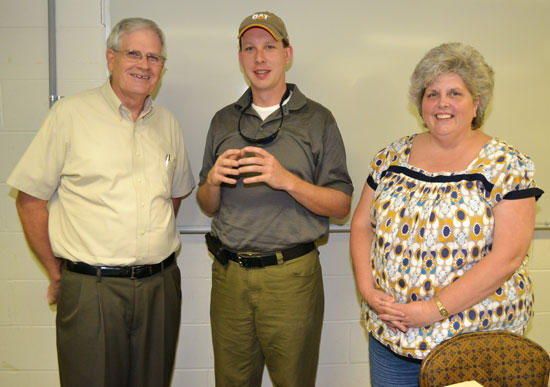 The Cannon County Historical Society held their bi-monthly meeting on Tuesday, September 13, 2011, at the Adams Memorial Library in Woodbury. Dedicated to the preservation of the history and heritage of Cannon County and its people, the Society’s next meeting is scheduled for Tuesday, November 8th with presenter, Colonel Jim Stone.

More than 50 people were welcomed to the meeting by President Joe Davenport. He introduced guest speaker and author, Robert Bush whose childhood was spent in Bradyville.  The young Bush became interested in history when visiting Lowe’s General Merchandize in Bradyville and listening as the older generation shared recollections of the past.

Bushes’ grandfather was James L. Bush, known locally as Mr. Fate, who was one of the first Rural Free Delivery (RFD) mail carriers in Bradyville. Beginning in 1906, Mr. Fate delivered mail by horse and buggy on Route 1 towards Hollow Springs and Tolbertsville. Morgan (Morge) Patten was appointed mail carrier for Route 2 towards Readyville.

Early mail carriers worked long hours and furnished their own uniforms and horse with buggy. Mr. Fate preferred a horse and buggy to deliver mail even after automobiles came on the scene. By training, his horse automatically stopped at every route mailbox. A gentle tug on the rains would get the horse on its way again.

By contrast, a motor car required shifting gears three times for every mail stop. Although Mr. Fate was the second person in Bradyville to own a vehicle, it was a good while before he switched to using it for mail delivery. He felt a horse was better suited for traveling across steep and muddy hillsides or rocky creek beds. Additionally, his horse never required extra time and energy to change a flat tire.

Earliest roads were laid out after boundary lines established Cannon County in 1836. A form of law from North Carolina called “Jury of View,” was adopted for Tennessee.  The “Jury of View” was a committee of five men commissioned by the county court to make impartial decisions as to what roads would be adopted. Although sworn to impartiality, they did not always choose the most popular route. But work progressed as leaders were anxious to establish main avenues of travel leading from smaller towns into the county seat of Woodbury.

Just as folks were not always happy about selected county roads, others were skeptical of RFD.  The U.S. Mail was picked up at the local storehouse where the owner commonly served as postmaster. Robert S. Fagan and his son John were the first merchants along Brawley’s Fork now near Bradyville. According to Jonathon Fagan, 7th generation descendent of John, the Fagan’s Storehouse was established in 1817. That same year Robert Fagan’s brother, Henry, was appointed the first postmaster in Milton. David Patton owned the first storehouse in Bradyville and was the first postmaster appointed in 1837.

These are just a few of the many details of the Bradyville and the surrounding areas provided by Bush. His presentation provided a wealth of history with changes that continue to impact our lives today.