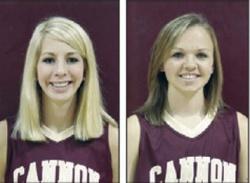 
Good thing the Lionettes had 15 shots.


Jordan Hollis was true on the only shot that mattered, rifling the game winner, for a 1-0 triumph that provided Cannon County not only its first win of the season, but also its first ever against Friendship Christian.


“It is nice to get that first win,” first-year Head Girl’s Soccer Coach Lydia Garrett said. “I’m proud of the girls. They have been working hard and it’s nice to get a win for the effort they have given.”


While Hollis supplied the offensive highlight, senior Ashley Basham was stellar in goal with the shutout. The defense was outstanding with Camille Gilley, Laken Manier, Bailey Sims, Caitlin Miller, Rose Magana and Mary Talbott all playing well to help control the ball and keep pressure off Basham. Kristen McReynolds was also solid in midfield, along with Paige Bauman. Molly Williams, Macy Williams, and Erin McReynolds all had shots that came off good looks but just missed the mark.


“We had 15 shots on goal so we moved the ball well and attacked,” Garrett said. “We just didn’t finish. Fatigue played a part in that.”