Sniper’s Rifle To Be On Rare Public Display 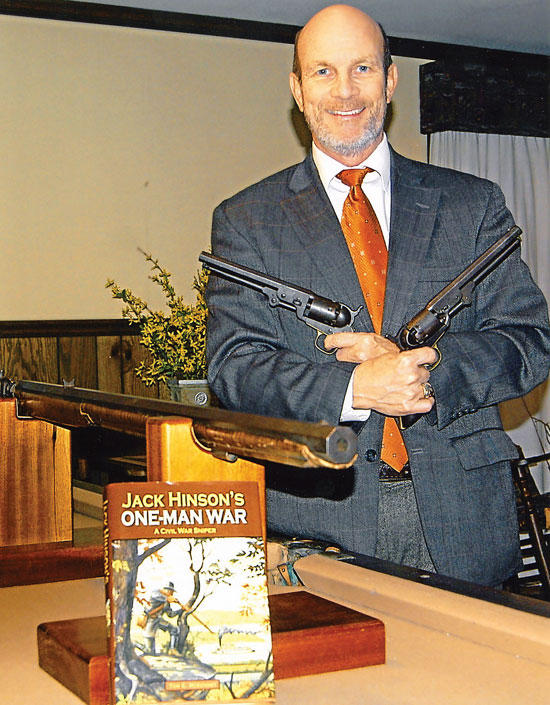 MURFREESBORO -  A rare public display of a prolific Civil War instrument of death, to wit, a sniper's rifle is scheduled for May 10 at the Rutherford County Court House.

Area residents will have an opportunity to view, at no charge, a rifle credited with slaying more than 100 Union soldiers when Circuit Judge Ben Hall McFarlin is scheduled to join Kentucky author Lt. Col Tom McKenney in a public lecture at Rutherford County's historic Court House, detailing the life of West Tennessee's "reluctant rebel" Jack Hinson.

McKenney, retired Marine author and speaker, will have his book - "Jack Hinson's One Man War" - available for purchase, McFarlin noted, at a cost of approximately $20.

It's a historic opportunity, noted published Civil War-period author Shirley Ann Farris Jones of Murfreesboro, to "examine and experience up close and personal" the history of Jack Hinson's rifle credited with slaying more than 100 Yankee officers and soldiers from ambushes along the Tennessee and Cumberland Rivers that cross the Tennessee/Kentucky border.

It's the first time Judge McFarlin has scheduled a "public viewing" of plantation owner Hinson's "sniper's rifle" that's been handed down in the McFarlin family since the Civil War ended in the mid-1860s.

"I thought it was historically-appropriate to bring Old Jack Hinson's rifle out for public viewing, at the same time author McKenney will be in Murfreesboro, detailing the deaths the weapon dealt to Union officers and soldiers in his book," McFarlin chronicled.

The rifle, which weighs more than 17 pounds, has a long trail of blood-letting by Hinson, a civilian Confederate-sympathizing West Tennessee sniper who waged "vengeance kills" on Yankee soldiers stemming from the decapitated heads of two of his sons left hanging grotesquely on gateposts at their prosperous Benton County farm.

An estimated 150 years later, the rifle with a loud past rests silently in the hands of prominent Murfreesboro Judge Ben Hall McFarlin, thanks to legendary Confederate Gen. Nathan Bedford Forrest after the Civil War's conclusion.

Before her death, Virginia Woodfin, an aunt to Judge McFarlin and mother of well-known undertake John "Bubba" Woodfin, described how the rifle came to permanently rest in Murfreesboro.

"Gen. Nathan  Bedford Forrest gave it to his adjutant general, Charles Anderson, who was my mother's great uncle," Mrs. Woodfin described in an early 1990s interview. "They gave it to my grandfather, who lived on Manson Pike and we kept it there."

Fire in the 1920s nearly accomplished what the Union Army could not achieve: Destruction of the rifle.

"When our Manson Pike house burned in 1929, we managed to save the gun and two or three other pieces," Mrs. Woodfin recorded at age 83.

According to author McKennehy, the rifle and its accuracy likely made "Old" Jack Hinson the most deadly one-man civilian killing force in Tennessee Civil War history. Although in his late 50s when he began his one-man rifle assault, he focused on Union officers when possible.

But, the Federals never captured him, despite designated special forces assigned to bring Hinson in.

Leading up to war, Hinson had remained "mostly neutral" until Union soldiers "bushwhacked" two of his sons and cut off their heads to display in the neighborhood. Hinson was against "secession" and had even befriended Union Gen. U.S. Grant and his forces before this wartime atrocity, according to Judge McFarlin.

"But Nashville Judge Roy Miles (deceased relative to the McFarlins) told me, when I was a small lad, that they played with and fired the old rifle when he was a youth…they used enough black powder to propel a bullet through a solid 20-inch wall of a school building. I don't plan to have the weapon restored to firing condition," McFarlin confirmed. "Restoring it to firing condition would require new pieces of metal and workmanship, and we don't want its authenticity altered."

The rifle was never meant for casual game hunting in the woods, the judge ruled.

"Old Jack Hinson's sniper rifle was never meant for firing from the shoulder," McFarlin added. "It was always mounted on an iron tripod or rested on the limb of a tree for long-range firing. But I don't have the tripod or iron metal ring that Old Jack Hinson used to target his victims."

The rifle has two triggers, one for cocking, and a delicate hair-trigger for pinpoint long-distance accuracy, McFarlin described.

Although the weapon is notched with 36 "kills," it's been estimated the rifle and it's huge-bore .50-caliber flesh-tearing bullets  ended the lives of more than 100 Yankee blue-uniformed soldiers, mariners and officers from ambush, mostly along the Tennessee River in Benton and Stewart counties during the War Between the States.

The weapon's legend grows today with a well-done biographical account - "Jack Hinson's One-Man War" - by author/retired military Col. Tom C. McKenney, that's available at most book stores and area public libraries. Here-to-fore, it's a history of the North-South conflict in Tennessee that's remained largely untold. To his credit, the author's meticulous in-depth research shares viewpoints from above and below the Mason-Dixon Line.

"It's a book that should be read by everyone interested in Tennessee history," noted 15-year-old Daniel Amick student of history and son of La Vergne businessman Karey Amick. "I go to Civil War re-enactments throughout Middle Tennessee, I can only imagine the interest that rifle would draw if it was ever displayed publicly.

"Can you imagine the powerful eyesight that elderly sniper had when he'd fire and hit Yankee soldiers as far away as one and two football fields away," young Amick added.

"We congratulate Col. McKenney on the long years of pain-staking research in putting the chronicles of Old Jack Hinson's life and recording some of the history of this rifle," the judge degreed.

McKenney's book dramatically describes one of the kills as a Northern Army gunboat was an easy target at a narrow chute of the river: "The gunboat would be in the chute at least 45 minutes. Old Jack (was) waiting patiently, smoking his pipe, cocking his heavy rifle with the Tennessee River below. Before the crack of 100 grains of black powder was heard on the boat below, a .50-caliber projectile slammed the officer to his knees…"

Today, the rifle's legacy lives, with its echoes of death still talked about as 150th anniversary of the Civil War is observed this year.