Snake Man On Quest To Rescue The Timber Rattler 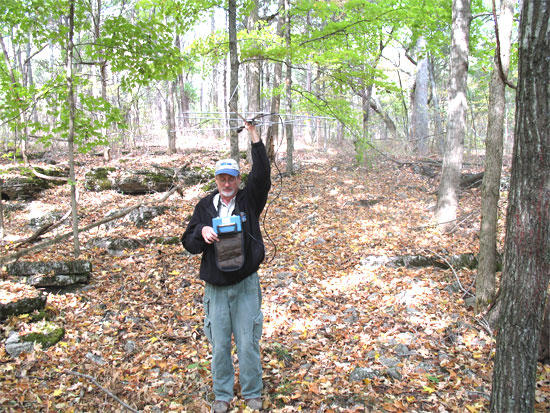 Danny Bryan has captured 20 to 30 timber rattlesnakes over the past 10 years and implanted transmitters into their body cavities so that he could follow their movements. Here, in the fall of 2008, he tracks one near Cedars of Lebanon State Park, a snake he now concludes that has probably been killed. (Photos by Ken Beck)

For more than 20 years Cumberland University biology professor Danny Bryan has been serving indiscreetly as a peacemaker for the timber rattlesnake.

By going among them to learn their ways, he’s hoping the information that he has gathered will help the timber rattler to survive, although their numbers have been rapidly declining due to loss of habitat and indiscriminate killing.

“They’re pretty passive animals. They are not aggressive, but they will defend themselves,” said Bryan, 50, who lives in DeKalb County where some of the residents of Smithville refer to him as “the Snake Man.” “They don’t get as large as people think. Hunters tend to exaggerate. I don’t know how many times I’ve heard of seven- or eight-foot rattlers in Tennessee. The largest caught in the state was 64 inches.”

Bryan’s research will culminate in his doctoral dissertation, “The Natural History, Survival and Conservation Plan for the Timber Rattlesnake, Crotalus horridus, at Center Hill Lake, Tennessee.”

“The first one I ever come across, I killed. I was maybe 13 at the time,” said Bryan. “The second one that I found, I tried to make it rattle, but I never could get it to. That was the turning point. These snakes are not what people portray them to be.”

The timber rattler is, indeed, a species of venomous pit viper that has a long a way to overcome its fearsome reputation. But Bryan is hoping his studies will raise awareness that these creatures are not nearly the evil reptile that legend has made them out to be.

What possessed Bryan to spend hundreds of hours over the past two decades years tromping through underbrush and woods and climbing the rocky outcroppings around Center Hill Lake?

“It was the reputation that they had—people thinking they deliberately tried to bite you. I wanted to know what these snakes were really like and should they be killed, to see if these perceptions of the snake were true,” said Bryan, who has mapped out the locations of where many of the snakes live.

“They’re not the vicious, deadly animals like people have been misled to believe. If you come across a rattlesnake, just back away and leave it alone. Chances are it is not going to hurt anything. They’re not mean, aggressive animals looking to bite anyone.

“They are pretty shy, reclusive animals. They depend on camouflage as a primary means of protection, and they rattle and rarely bite,” he said. “Typically, from what I found, they don’t like open areas. They like mature forests with 80 percent or more of canopy cover. They like rocky hillsides for hibernation sites.”

Over the past decade, Bryan has captured 20 to 30 of the timber rattlers and implanted transmitters in their body cavities, then released them close to where he found them to study their movements.

On a late July morning Bryan cruises across Center Hill Lake in a motorboat. Inside a white cloth bag a couple of feet behind his seat lies a 4-foot-long male rattler who makes no movement nor sound. Captured in a backyard, the snake is being relocated to a protected area of the lake that is also a favorite gestation site for timber rattlesnakes.

“I know of at least four different females that come here,” says Bryan. “Typically they start to give birth in mid-August and give live birth from six to 12 snakes. We’ll see if we can sneak up on a female.”

Since it’s not a sunny morning, no rattlers are seen soaking up solar rays, but Bryan knows they are underneath nearby rocks.

Bryan places his live cargo down on a bed of limestone and allows the 6-to-7-year-old rattler (they can live to 20 years of age) to ease itself from the bag.

“Their body bands are unique to each snake, like fingerprints,” says the Snake Man. “You ready? He’s going.”

The handsome critter slithers out slowly, almost shyly, and then freezes on the limestone. Movement causes it to coil, and the rattles shake at rapid speed. You can hear the rattling as well as a "ssssssss" hum coming from the head. A minute or two later, the snake goes straight for a rock that Bryan suspects is concealing a female.

“He smells her. His testosterone is high, like a teenager,” says Bryan.

Pointing to electrical lines further up the hill, he says, “That power-line cut is like Interstate 40 for the snakes. The females are smaller and like to stay in the wooded area. This is where they introduce themselves to each other, much like a pick-up bar.

“The large males use the power-line cut for feeding on cotton rats when blackberries are ripening. The males bulk up and this is a big area where they combat. I’ve seen two different males at different times in combat out here. That is a rare sight.”

The biologist said that these snakes can strike at 150 mph. They can’t jump, and their strike is about one-third of their body length. The large males dine on cotton rats and gray squirrels. The female timber rattlers eat chipmunks, voles and mice.

“Venom is a precious commodity. They don’t want to strike anything that isn't food. They’re not aggressive,” said Bryan, pointing out their venom is not as potent as western species of rattlesnakes.

“If you do get bit, you have several hours to get to a hospital. More than likely, you won’t die from a rattlesnake bite but could suffer tissue damage,” he said.

Around Center Hill Lake the adventurer fears more falling and breaking a leg than he does venomous snakebites, but just in case he is bitten by accident, he carries epinephrine in his backpack for fear of allergic reaction to the venom. He also fears arachnids.

“I despise spiders. I don’t mind snakes,” he says after brushing a spider web from his face, “but I don’t like spiders and spider webs.”

Bryan is among 15 to 20 others studying the timber rattler and the only one doing an ecological study in Tennessee. A consortium of biologists are working on a conservation plan with the U.S. Fish and Wildlife Agency and hope to have the timber rattler placed on the endangered species list.

As the sun comes out and the temperature soars, Bryan wades uphill through ankle-deep poison ivy and underbrush and across loose rocks. He has marked 10 den sites using his GPS within an 11.3-meter radius. Here he gathers variables around the den sites as to what makes this area more desirable. With his instruments, he takes measurements on tree diameters, the slope of the land, the aspect (direction the slope is facing) and the percentage of exposed rock.

“They use limestone rock for den sites,” he says. “There are about one to two snakes per den. Some of the dens I’ve been to so many times I know them by heart. Others, I’ve only been to once or twice.”

Bryan, who is also a botanist, will be teaching general biology and microbiology as he enters his 20th year as an instructor at Cumberland University in Lebanon. He earned his bachelor degree in plant and soil science at the University of Tennessee and his masters degree in biology at Middle Tennessee State University. He hopes to pick up his doctorate next May at Tennessee Tech in Cookeville.

Before coming to Cumberland, he worked as an environmental biologist at AEDC for the Department of Energy and taught at Martin Methodist College in Pulaski, Tenn. Bryan grew up in Tullahoma, and that’s where his fascination for snakes began.

“I can remember being at my grandparents’ farm when I was 5 or 6. Their back porch was open underneath. I saw this pretty big rat snake under there, and my father proceeded to get a hoe to kill the snake,” said Bryan.

“I was perplexed and not afraid of the snake but full of questions: ‘Why do you want to kill the snake? Is it poisonous?’ The snake was not trying to hurt anybody, but my daddy said, ‘We don’t want it in the house because it’s a snake.’ That pretty well turned the tide for me,” said Bryan, who carried harmless ringneck snakes to school in his pockets as a lad.

Several years back, the biologist got a phone call from some men laboring at a sawmill near Woodbury in Cannon County. They had killed one timber rattler and a while later captured another. Bryan drove over to examine the snake and show them how non-aggressive the snake really was. The men released it, exclaming to Bryan, “We never knew they were like that. We’ll never kill another one.”

That’s the kind of reputation about timber rattlers the Snake Man would like to spread across the land.