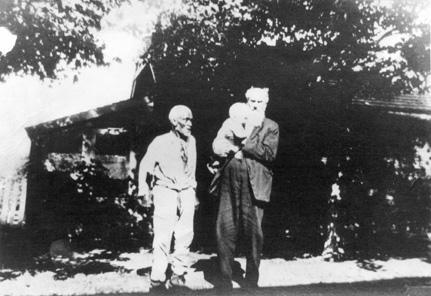 Historians around the globe know about Tennessean Sam Davis, the famous Confederate Coleman Scout (spy) who chose death by a hangman's noose rather than disclose identities of fellow Southern Civil War sympathizers.

However, few know about "Uncle" Charlie Waldron, who was born into slavery when his mother, Sally Waldron, gave birth to him either on or near Smyrna's former Davis Plantation in the 1840s.

Even fewer know about the conditions "Uncle" Charlie survived as a slave to the Davis family leading up to the Civil War. However, thanks to modern-day caretakers of the historic Sam Davis Home, Smyrna, Tennessee's largest tourism attraction, here-to-fore untold details of Uncle Charlie's and other slave lives are being made public.

"For example, there are no records showing how plantation owner Charles Davis (Sam Davis' father and owner of the Davis Plantation) treated his slaves," verified Christina Runkel, Sam Davis Museum Director of Collections and Interpretation. "However, due to an archeological dig by students from Middle Tennessee State University, we know that Uncle Charlie was curious not only about his ancestors, but about Native Americans and their life styles too."
"Due to the artifacts found in the interpretive 'dig' beneath the cabin Uncle Charlie lived in for years, they found multiple arrow heads and other items from the Native American culture that preceded the slave era of our nation," Runkel described while pointing out a "brick" likely built by the hands of slaves.

"This particular brick shows the prints of a foot, likely the foot of the slave who helped operate the kiln that bricks were fired in," Runkel added. "This other brick, shows the stroke of a hand, likely swiped on the brick prior to the kiln."

"Slaves who had masonry talents were highly-valued, because they could construct structurally-safe chimneys and make bricks for safe walkways," Runkel shared. "Many large plantation farms had individual kilns."

However, cotton and swine products, including cured hams, brought the most profits to the Davis Plantation, Runkel accounted.

By 1850, Tennessee had evolved into a major slave-exporting state.

"In that year, eight slave auctioneers operated in Nashville, a slave market second only to Memphis in the state," as documented by Nashville author/historian Bobby L. Lovett, in his well-researched book entitled "The African-American History of Nashville, Tenn., 1780-1930." "Nashville's slave traders purchased some of their human cargo in Kentucky and sold slaves to Alabama and Mississippi. After 1855 the Tennessee brokers exported slaves to Texas and Florida."
Author Lovett also shared: "While the slave business developed in Nashville, not all local whites admired the 'peculiar institution.'"

Typically, in America's slavery era, there was no money exchanged when someone like Uncle Charlie was born to a slave mother. Uncle Charlie, like thousands of slaves in the South, was freed after the Civil War's conclusion and President Lincoln's historic Emancipation Proclamation."

However, Uncle Charlie returned to the Davis Plantation after 1900, when he lived in the home's kitchen and in a nearby slave cabin.

At the peak period of upper middle-class prosperity in the 1850s, records show the Davis Plantation had more than 50 slaves.

"The Davis family was considered upper middle class, but not in the status of Murfreesboro's more wealthy Maney Plantation and Nashville's Belmont Plantation," Runkel detailed.

Historians, educators, parents and grandparents, plus children will have the opportunity to learn never-told-before details about slavery as it was practiced at the Davis Plantation.

On Feb. 8, a Saturday, interpreter Runkel will orchestrate an in-depth "Curator Talk & Tour," when guests will get an "inside look" into the museum's featured exhibit. Admission is $15 per person, for the 90-minute presentation starting at 1 p.m.

"We request reservations be made in advance by emailing education@samdavishome.org or by calling 615-459-2341," Runkel requested.

"This is an opportunity to learn what went into creating the exhibit, an opportunity to dig into the history of the exhibit," curator Runkel shared. "There will be a topic-specified guided tour of the historic house and grounds, when participants will learn more about those who labored here as slaves, including 'Uncle" Charlie Waldron, who left the plantation after emancipation, but returned after 1900, after which he worked as a servant in the Davis' household."

There is another opportunity, this one free to the public, for parents and grandparents to share this important American history with children.

"On Feb. 23 (a Sunday), we will celebrate the rich musical history of African-Americans during after the Civil War," added Runkel. "That will be part of the free 'Family Day' on Feb. 23, from 12 noon to 4 p.m., suitable for children of all ages. Families will get the chance to to play an orutu (stringed instrument), a thumb piano, a finger drum and more with this hands-on program while learning the role that music played to African-Americans laboring on the Davis Plantation with songs."

Two titles of enslaved African-American songs are "Follow The Drinking Gourd" and "We are Climbing Jacob's Ladder."
"Visitors and children will also have the opportunity to create their own African tribal mask that day," Runkel added. "Admission is free and includes activities and museum admission."

"That's when visitors can learn about several of the Davis' enslaved," Runkel shared. "In addition to Uncle Charlie, slave Isaac was an enslaved worker purchased by Charles Davis in 1954."

Immediately after the war's conclusion, "Uncle" Charlie Waldron is reported to be one of those slaves who walked away from the Davis Plantation a free man.

Upon returning to the Davis farm, Uncle Charlie worked and lived until his death in his eighties in 1925, as verified by a death certificate provided for this forum by Rutherford County history researcher John Lodl, a former director/curator of the Sam Davis Home.

In history annals, young Sam Davis is remembered as the "Boy Hero of the Confederacy," after his death by hanging. Rather the divulge the name of Confederate allies, he purportedly told his Union captors: "I would rather die a thousand deaths rather than betray a friend." He was captured carrying Union war plans at Minor Hill, Tenn., on Nov. 20, 1863. His remains are buried behind the Sam Davis Home.