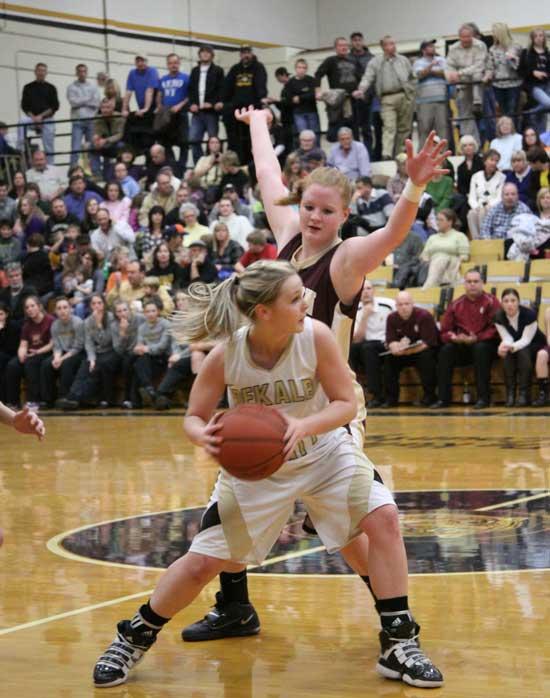 Lionette senior post Chelsey Payne, defending, was voted District 8-AA Most Improved Player by league coaches this week. Payne has started every game this season and helped lead the Lionettes to a 23-win regular season.
Talent and depth were key ingredients for Cannon County's Lionettes during the season and those qualities shown through when the All-District 8-AA team was voted on by league coaches Monday.

Six Lionettes were honored, including three players earning specialty awards, after the Lionettes reeled off 23 regular-season wins and were ranked as high as No. 3 in the AP Class AA Top 10 poll.

Taylor King was voted 8-AA Defensive Player of the Year, Chelsey Payne was selected 8-AA Most Improved Player and Abbey Sissom earned the nod as Freshman of the Year to highlight the selections.

King and senior standout Emily Sissom were voted All-District 8-AA First Team. It marks the fourth consecutive all district honor for Sissom. Lauren Ruehlen and Payne landed spots on the five-person second team, and Lindsey Reed and Abbey Sissom were honored as third-team selections. Reed was also voted to the All-Defensive Team.

"These girls have worked hard and made a lot of sacrifices during their careers and they deserve this recognition," Lionettes Head Coach Michael Dodgen said. "It's good to see kids who work hard get rewarded."

King is second on the team in scoring (11.4) and rebounding (6.0) but being a defensive stalwart earned her the reputation of 8-AA Defensive Player of the Year. She disrupts opposing offenses with her long wing span, leading the team in deflections, while generally holding her opponent below the season average.

"It makes me feel great," King said of the recognition. "Coach Dodgen always says defense is the key, and I have always taken that to heart."

Dodgen said the honor not only is deserving, but also appropriate.

"Taylor is one of the unsung players that people may know all of the things she does for this program, whether it be offensively or defensively, just whatever she is asked," Dodgen said. "To get Defensive Player of the Year speaks volumes because she takes pride in defense. When you take pride in that aspect of the game it says a lot. Taylor does her job and does it admirably."

Payne was not a fixture in Cannon County's lineup until the 2010 postseason a year ago. This season she started all 29 games and logged more than 25 minutes in the majority of them. The hard-working senior post has performed well, averaging 11.1 points and 7.3 points per game.

The district's coaches lauded her play and rewarded her work ethic and dedication when they voted her District 8-AA Most Improved Player.

Helping the team succeed is Payne's purpose but she said recognition for her improvement is realization that hard work pays off.

"It feels good to be recognized  for all of the hard work I've put in the last three years," said Payne, whose second-team, all-district honor was the first of her career. "It is nice to finally get to show what I've learned and how much I've improved I knew I had the talent and I finally got to prove it."

Abbey Sissom was thrust into a tough role in 2010-11 when she became the starting point guard in the preseason. She handled the pressure of helping lead one of the state's top teams with positive ratings. Abbey Sissom averages 9.5 points and 4.0 assists for the Lionettes with a strong 2-to-1 assist/turnover rating.

Coaches made her the overwhelming choice for 8-AA Freshman of the Year and voted her to the All-District 8-AA Third Team.

"We have a very tough district and some excellent coaches so it's quite an honor to be recognized like this," Abbey Sissom said. "I couldn't do any of it without my teammates and coaches. We have a lot of really good, experienced players on the team so that made the adjustment much easier for me."

Dodgen said Abbey Sissom was expected to play a large role this season after a strong summer and preseason; however, it increased just before the campaign started due to injuries.

Once in the lineup, she became a fixture.

"Abbey Sissom came into one of the toughest districts in the state, started every game and handled herself well," Dodgen said. "She has done a great job to help lead this team. She has a bright future."

Emily Sissom leads the Lionettes in scoring with 13.7 points and 2.5 assists per game. Her scoring average dropped somewhat this season but the Lionettes featured a more balanced offense with four players averaging 9.5 points or more per game.

"Emily is one of those players who will do whatever it takes to help the team win," Dodgen said. "She is one of the best shooters and top scorers in our district and is capable of putting up big, big numbers on a given night. It is quite an accomplishment to make all-district four times for any high school kid so I am really proud of Emily and what she has meant to our program."

Weather may have assisted two Lionettes who earned All-District recognition. Ruehlen and Reed missed most of the first half of the season with injuries but several postponement of league games due to inclement weather provided each an opportunity to play in more district games down the stretch.

They made the most of those opportunities.

Ruehlen, who suffered a season-ending knee injury at the end of last season, experienced another setback during the preseason and was out of action until after Christmas. She has steadily progressed and earned second-team honors.

"I am happy just to be out there playing," Ruehlen said. "I didn't expect to be named All-District so this is really an honor. I feel like it took me awhile to get back. I know I will never get back to where I was, but I do feel like I'm getting there."

Ruehlen, who has made one of the all-district teams three straight years, averages six points and five rebounds but has done her best work in the last two weeks and has steadily increased her scoring and minutes.

"Lauren is starting to get in her groove," Dodgen said. "To come back and play in seven district games and get the recognition she did says a lot about her."

Reed also is regaining form after suffering a back injury that sidelined her six weeks. The junior standout is a well-rounded player who gives the team a boost offensively, defensively and on the boards when she's at her best.

"Lindsey is the spark for our team that does everything," Dodgen said. "She scores, gets steals, rebounds, takes charges, gets loose balls. Getting her back healthy has been huge. For her to be honored and recognized after missing part of the season, she's probably shocked."

"It's a huge honor just to be on a team," Reed said. "Each year I have worked my way up. I was on the All-Freshman team and then I received honorable mention as a sophomore. I really wanted to push myself to try and make one of the actual teams this year. I thought that was down the drain when I got hurt so this is a really big honor.

Cannon County and its six pack of All-District performers will begin the postseason when they open District 8-AA action against DeKalb County at White County High School Thursday at 6 p.m.