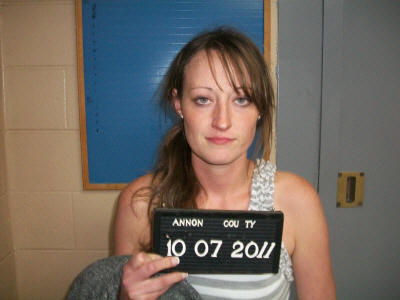 A domestic assault charge was filed against a Woodbury woman following an Oct. 7 incident.

Laura Nicole Whitworth, 5425 McMinnville Hwy., was arrested by Cannon County Sheriff’s Deputy Eric Moss after she allegedly struck her sister, Jessica Stephens, and slammed a door on her foot, causing bruises and a laceration.

Bond was set a $3,000. Whitworth was appointed the public defender in General Sessions Court on Oct. 11. Her next court date is Nov. 1.

• Jeremy Brian Cope, 126 Gassaway Road, Woodbury, was charged with Driving on a Suspended License on Oct. 8 by Woodbury Patrolman John Fesmire. Cope was stopped on W. Adams St. after he was seen leaving a known drug-related residence and he failed to turn on his vehicle lights at a time of day when they are required to be operating. A release citation was issued. Initial court date is Nov. 15. Cope is currently on probation after entering a best interest plea of guilty to a marijuana possession charge on Oct. 4.

• Amye Michelle Webb, 2029 Shelby St., Apt. 421, Murfreesboro, was charged with criminal trespass on Oct. 7 by Woodbury Patrolman Chris Brown after she allegedly entered and/or remained on the property of the Holiday House at 310 S. Dillon St. without the owner’s effective consent to do so. A release citation was issued. Initial court date is Nov. 8.

Print
Members Opinions:
[Delete]
Looks like Laura needs a bully beat down, check it out on MTV2 channel