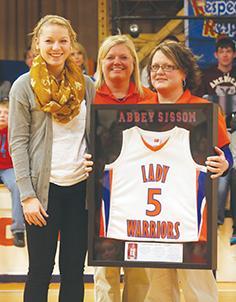 Woodland retired the jersey of Abbey Sissom. She is joined by her mom Woodland girls coach Suzette Sissom, center, and assistant MaryBeth Young.

When you visit Woodland, the many banners hanging in the rafters of the gym and the pictures of former classes in the hallways show that tradition is something in which the school takes pride.

The many banners represent quality athletes that have participated at Woodland.

On Jan. 23 Woodland recognized one of those special athletes - Abbey Sissom. During her tenure as a Lady Warrior, Sissom earned several awards and became the all-time leading scorer for Woodland.

Sissom finished with 1,124 career points as a Lady Warrior, which stands as the highest in school history.

She continued to enjoy outstanding success at Cannon County High School, where she was a four-year starter, three-time Miss Basketball Finalist, Class AA Miss Basketball in 2014, three-time All-State, two-time District Player of the Year and finished her career as the second-leading scorer in school history.

Sissom will continue her career next year on a basketball scholarship to MTSU and will become the first Cannon County player to become a Lady Raider.

Woodland is proud to honor Sissom with the retirement of her Woodland jersey.