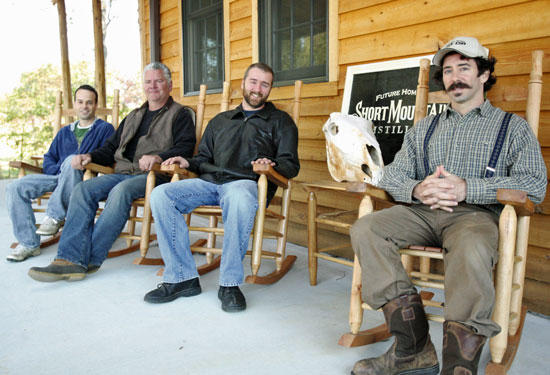 The men behind Short Mountain Distrillery, Christian Grantham (from left), John Whittmore, Josh Smotherman and Billy Kaufman, sit on the front porch of the distillery in Cannon County. (Photo by M. Hudgins)

For the first time in more than 200 years, Short Mountain whiskey is legal.

It's no secret that moonshine is imbedded in the culture of Cannon County, together with limestone and basket weaving.

In the Cannon County mountains, they have bright and growing fountains.

On every hill they have a still.

But you just remember one hundred days from next November,

There'll be moonshine in the Cannon County hills.

O, those hills, those beautiful hills,

There'll be moonshine in the Cannon County hills.

Bright lights on Broadway, the sun shines bright in Dixie

But there's moonshine in the Cannon County hills.

"The only industries in Cannon County for a long time were white oak basket weaving for women and making moonshine for men," Billy Kaufman explained.

"My great grandfather came from North Carolina, and that's how he (provided) for his family," John Whittemore added. "If it wasn't for baskets and whiskey, we would've starved to death."

Through a series of connections and lots of coincidences, four men - Kaufman, Whittemore, Christian Grantham and Josh Smotherman - were brought together to pursue their collective dream of making (legal) whiskey on Short Mountain.

But their dream goes much further than creating and selling a lucrative product. It's about going back to the way things were by using local farmers, maintaining old recipes and being true to their values.

Call it a stimulus of sorts.

"China is not involved," Kaufman said.

"In fact, China would be receiving this product," Grantham added. "A lot of Americans are looking for a fix for what is broken. One of those fixes is looking to our heritage of sustainability as Americans and how to make it relevant to the economy."

"There's no quick-fix decisions," Kauffman explained. "Everything we're doing is based on original values, shop local first, conservation, recycling - it is all part of our practice."

All of the manufacturing equipment was made in the United States - a fact in which the men pride themselves. They thought it would be a good idea to slap American flags on everything to prove a point, but the distillery turned into a hodgepodge of red, white and blue.

"A lot of it is investing in our neighbors who are within five miles of us," Kaufman said. "The closer the connection, the better the reward. When hiring neighbors, they're going to work harder, come back and talk to their friends about you."

"How many people would do that for Walmart? Just think about that," Grantham said.

"There are so many cheap options, but people don't ever realize the true cost of choosing those options," Kaufman continued. "We're already starting to reap the benefits of working with neighbors, and we haven't even started (distilling) yet. I can see the rewards of it once we start going - it's just going to take off."

"We want to make moonshine the American vodka," Kaufman said.

Down a winding road, up a short mountain, between rows of cows and corn is the distillery - right where it should be.

"They made moonshine on this farm; it was just part of the infrastructure," Kaufman said.

"A lot of old-timers would talk about selling sugar or making moonshine," Grantham said.

"It's in the blood on one side or the other - either selling sugar or busting moonshiners," Kaufman added.

After all, homemade whiskey has been illegal in the great country of Cannon County since prohibition.

"Before, it was a gentleman's game ... somebody would call up and say, 'They're going to be busting your still, so you'd better not be there,'" Kaufman explained.

Not much will be changing - the recipes and even the distiller are the same - except that now it's legal and more pleasing to the palate.

"Retired moonshiners will be making everything, but it will (taste) better because of modern technology," Kaufman said.

Just as historians document wars, these men are fighting to preserve the stories of Cannon County's moonshiners.

Grantham explained how the days of passing down recipes and techniques is long gone. While still a lucrative business, moonshine making is hard work.

"The moonshiners are dying off and retiring, and their kids aren't carrying on (the business)," he said.

Rathre than letting their stories go untold, three retired moonshiners will bring 150 years of combined experience to Short Mountain Distillery, where they can share century-old recipes and techniques for making moonshine.

"Their families have been passing down skills for three and four generations - since 1910," Kaufman said.

Before prohibition, farmers would sell their excess products to moonshiners. It just made sense to do so.

"If you have too much corn, what's the best thing to do with it? Put it in a bottle you can keep for years. Send it across the country, use it for medicinal purposes and, obviously, celebrations," Kaufman said. "People with orchards could sell their products to small distilleries to at least make extra money. Tennessee doesn't have nice fruit, but it's nice enough to make into whiskey."

"Doing so gave (crops) shelf life," Smotherman said. "All that went with prohibition, but people still carried it on because it was part of their tradition."

White lightnin', un-aged whiskey, white mule - call it what you like, but moonshine will once again be produced in Cannon County come January and February. Bottling starts come March, and it'll hit stores in April.

The public will be invited for tours on Friday and Saturday beginning March 23, where they'll be able to talk with living legends.

At first, only moonshine will be available for purchase, but whiskey won't be far behind.

"Whiskey is just moonshine flavored with wood - it's like tea," Kaufman said, adding that Short Mountain Distillery will use new, charred oak barrels to age the liquid.

RalphHenderson
[Delete]
Just what the county and country need, another way to get drunk (high, etc.).

The other day there were conversations about all the crimes being published here. All the bubba's running up and down the roads with a snoot full of shine should provide several more articles a week.


Sure, some will say that it's not like you can't buy whatever you want on any corner to get loaded. But, I say just because there's a fire does not mean you have to poor gas on it.
Tea
[Delete]
I dont know anyone who was killed, committed crimes or killed anyone else because they used a white oak basket.
Cant say that about Whiskey/alcohol.

There are roughly 16 other counties listed below Cannon County in population and Trousedale holds the title as the smallest county in Tennessee in actual land mass.
[Delete]
Im pretty sure when the voters passed to serve alcoholic beverages in Woodbury, that there weren't a bunch of drunks walking up and down the street right after. I just went on a trip to Gatlinburg, which by the way has a distillery and Om My Gosh......I did not see one single drunk or a bunch of people trying to get drunk. If a person is going to be a drunk or try to get drunk then they are gonna do it with or without a distillery in Cannon County. I wish those boys all the best!!!
[Delete]
I don't remember the voters passing a law to "serve alcoholic beverages in Woodbury".

Unless I am mistaken the vote was to allow for the distillery to manufactor moonshine. I believe we are still considered a "dry county" and cannot sell whiskey or wine by the drink or the bottle.
[Delete]
we voted to have alcohol served in our restaurants did we not? thats what i was referring to corey!
JeffSchuler
[Delete]
I wish this enterprise the best! It's nice to see a productive endeavor come to fruition! I hope to be a continued part of this new business! Bravo!
[Delete]
ad am the vote you are talking about was to sell beer inside the city limits of Woodbury. That vote was solely done by residents who live inside the city limits.

The vote the entire county had was for the manufacture of moonshine. It is still illegal to sell / serve whiskey or wine by the drink or bottle in Cannon County or inside the city limits of Woodbury.

[Delete]
I know, all i'm saying is the above comment made by ralphhenderson saying that there are going to be drunks everywhere now that there is a distillary is absurd. i was just trying to make a point that when it was passed that we could sell beer in the city limits it did not open up a can of worms. the streets of woodbury was not full of staggering drunks because of the sale of alcohol. and since we now have a distillery, there are not going to be any more drunks that there already are, thats all i was trying to say!
[Delete]
10-4 gotcha ad am. Good point!

I haven't heard of an increase in DUI's or PD's arrests since the ability to sell beer inside the city limits was enacted either.

I have seen the tax dollar figures it has brought in though. No one seems to be turning that down.