MIKE VINSON, Special to the Courier 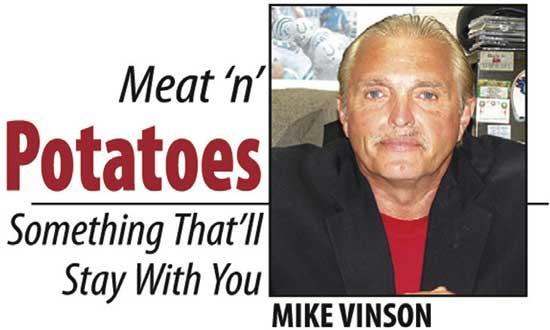 “I was single at the time and ‘catin’ around and had a good lookin’ honey with me. It was a Sunday afternoon and I had loaded my 1947 blue Pontiac with 80 gallons of moonshine in the Pea Ridge area of Cannon County. My girl friend and I were on our way to Cookeville with the liquor. . . .”

Sounds like a scene out of the movie Thunder Road, about a Tennessee mountain family making and running moonshine, starring Robert Mitchum, doesn’t it? Actually, it is a quote from Luke Denny, the legendary ‘shine runner out of Smithville/Dekalb County, taken from the book about his colorful, rough-and-tumble life, Midnight Moonshine Rendezvous (page 186), written by Dr. Stony Merriman.

Indeed, Short Mountain has a long, rich history for producing moonshine. Having grown up in the Centertown-Blues Hill area of Warren County, about a 20-minute drive from Short Mountain, I, personally, can attest to the “lore” that connects Short Mountain to the craft of whiskey-making. Without going into needless detail and giving up any names, I’ll just say that clear, homemade, high-proof liquor could be purchased at any of several Short Mountain locations back in the day.

Short Moutain resident Billy Kaufman is a main cog in the effort to see the distillery become reality.

“Billy is a farmer and sees how distilleries once made farms work. Nearly every single founding father distilled their farm grains. The Whiskey Tax was one of the first taxes levied to pay for war and to build our nation. U.S. Census data shows in 1840 that Cannon County had 18 distilleries,” stated Christian Grantham, who works closely with the Short Mountain Distillery effort.

“Billy wants to make his organic farm successful and he wants to create jobs and revenue for his local neighbors. He wants tourism to bring revenue and sustain jobs for local businesses as well.”

It appears that Billy Kaufman is of the blood line to adequately assess the situation at hand, peer down the Stream of Time, and oversee a business (Short Mountain Distillery) that could prove beneficial to the collective good of Cannon County and surrounding counties: Kaufman is the great grandson of Jesse Schwayder, who founded Samsonite in 1910. Still, it was Kaufman’s grandfather, Louis Degan, who brought Samsonite to Murfreesboro, a move that provided jobs and security to a number of families for decades.

I’m confident that Cannon County–like most any other county in Tennessee–could use an economic infusion, which the Short Mountain Distillery, likely, would bring. Too, such a distillery would assist in both preserving and promoting a chapter of history that is indigenous to the area.

– To permit and legalize the manufacture of intoxicating liquors and other intoxicating drinks within the boundaries of Cannon County.

– Not to permit and legalize the manufacture of intoxicating liquors and other intoxicating drinks within the boundaries of Cannon County.

For some reason, as I wrote this, I kept thinking about the Steve Earle hit “Copperhead Road”:  “Well my name’s John Lee Pettimore/Same as my daddy and his daddy before/You hardly ever saw Grandaddy down here/He only came to town about twice a year/He’d buy a hundred pounds of yeast and some copper line/Everybody knew that he made moonshine.”

As do these lyrics, the making of  “spirits” just might end up lifting some spirits in Cannon County.

(NOTE: For more, go to: www.shortmountaindistillery.com.)

Print
Members Opinions:
yisagirl1
[Delete]
Let him do it. This county needs stores and many things so that people don't have to shop out of town. I will never understand why they don't bring more here. Doesn't make sense.
vdarr1
[Delete]
Mix the shine and its effects with those country rednecks and you have a pending explosion. this will bring more crime into the area