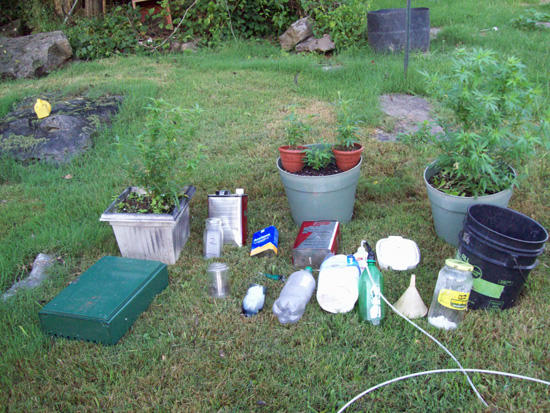 On 3 October 2009 Sheriff Billy Nichols and the Special Operations Response Team (S.O.R.T.) executed a search warrant in the northwest part of the county after officers received a call from Rutherford County's 911 Center about a unusual phone calls coming from a cell phone in Cannon County.

When officers arrived at the home, they saw items associated with the manufacture of Methamphetamine. A search warrant was then obtained and officers entered the home to find discarded and used chemicals, liquids, and other paraphernalia that had been used to produce the illicit and dangerous drug.

Sheriff Nichols stated that this Meth Lab was different from those of past incidents. This one appeared to be set up to use Lithium Metal and other volatile chemicals.

Sheriff Nichols re-emphasised his hard stand on drugs and the manufacture of Methamphetamine stating that this is a major cause for other crimes in our county and can only be deterred by taking a hard stand.

Captain Charlie Wilder stated that this now seems to be the trend in the manufacture of Methamphetamine and he is seeing more and more incidents using this method.

Also found on the property were several Marijuana Plants.