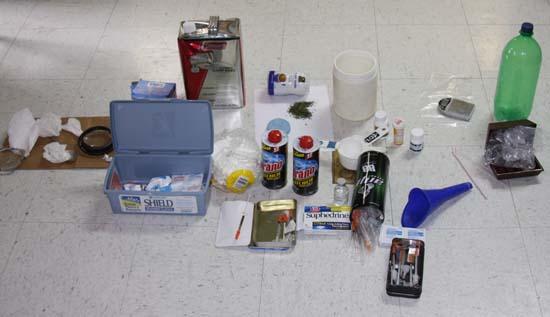 The Cannon County Sheriff's Department has closed down another meth lab, its fourth in the last month.

Sheriff's Investigator Anthony Young said he received information on March 3 that a meth lab was being operated at 64 Arthur Hollis Road.

Investigator Young, along with Sheriff Darrell Young and deputies Randy Neal, Seth Perry and Eric Moss, all went to the location.

During the course of the investigation at the scene, the officers discovered a meth lab.

"The meth lab was still warm to the touch," Investigator Young said. "There was also a lot of drug parapheralia there used for making meth. along with the finished meth product."

Also found during the search was a small quanity of marijuana, Investigator Young said.

All of the meth-making materials and finished product were destroyed by a Hazmat team, Investigator Young said.

Total bond was set at $157,000. Frattallone remains in custody at the Cannon County Jail. She was appointed a public defender in Cannon County General Sessions Court Tuesday. Her next court appearance is May 3.

Another person who was in the home at the time of the discovery of the meth lab, Dillan Anthony Collette, 65 Mason Hollow Rd., was charged with simple possession of marijuana.

Print
Members Opinions:
[Delete]
What goes around comes around
[Delete]
just show everybody what you need to make it
[Delete]
It's no big secret. Google it and see what you get.
[Delete]
look at the chemicals...no wonder people die from taking this mess. The devil is in the details
punkin01
[Delete]
It took 8 years but you finally got it Antonette.Sherriff Young should've been elected before now a job well done.
Mollie2
[Delete]
It amazes me what people will actually put in their bodies to get high.
punkin01
[Delete]
Junkies never change
punkin01
[Delete]
I hope that the judge will allow for judice.
cattallone
[Delete]
interesting