Sheriff Thanks Community For Tremendous Support For Overcast

Letter To The Editor 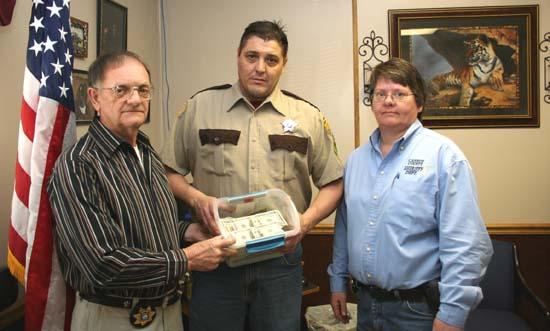 Mrs. Overcast received serious burns in a home fire in January and has been released from the burn unit at Vanderbilt Hospital and is now at home recovering. She is the wife of Todd Overcast, a Transport Officer at the Cannon County Jail.

The Cannon County Sheriff’s Department sponsored the supper which included chili, hot dogs, drinks and dessert, an auction of items donated from individuals and businesses and a variety of local musical groups. Steve Smith provided the sound system for the evening and played a variety of “oldies” music before groups such as The Gilley Brothers, Clyde Nokes and the Blue Grass Mountain Boys, True Hearts, The Gulley Jumpers and Daniel Riggan performed

Joe Young and Harold Patrick served as auctioneers and sold a variety of donated items including cakes and pies.

We were extremely pleased with the turnout. We had a great crowd, fed a large number of people and everyone enjoyed the music and auction We knew that the girls basketball team was playing for a berth in the State Tournament at CCHS and a lot of people came by and ate with us on the way to the game. I was disappointed that they lost their game but I want to congratulate the Lions and Lionettes on a great season.

Jail Administrator Anna Nichols, who coordinated the event, said proceeds from the supper and auction totaled $8,105.00. We also had a little over $1,900 from individuals, churches and organizations including a check for $300.00 from the local chapter of the FOP (Fraternal Order of Police) for a total of over $10,000.

“All the funds will go to Todd and his family to help with medical and other expenses and we hope that Tonya has a speedy recovery. The family did not have medical insurance and some of her medicine and supplies are very expensive. The list of people is too long to name everyone that helped us put on this event but without their support it would not have been such a success,” said Anna Nichols

I would like to thank some of the major sponsors of the supper. They included: Woodland School Principal Kim Parsley, Cannon County Board of Education and Director of Schools Barbara Parker, Steve Smith, Piggly Wiggly, Robert Orr Sysco, Bunny Bread and Cannon Market. Lastly I want to thank my employees. They are a dedicated staff and I appreciate all their help. The supper was a huge success and is all because of their hard work.

Also contributing a big part in the success of the Chili Supper and Auction was Angela King and the staff at the REACH Program and to anyone else who helped in any way - we say THANK YOU!