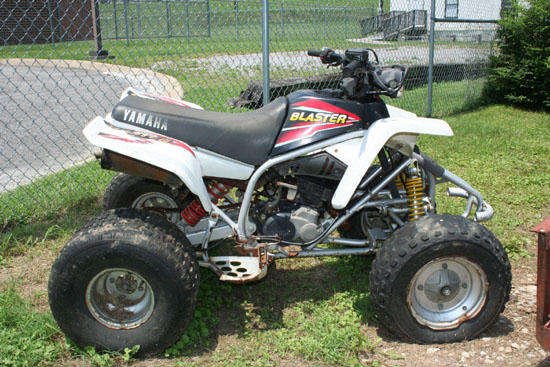 This Yahama Blaster 4-wheeler will be auction July 17.
The Cannon County Sheriff’s Department will conduct a Seized Vehicle Auction on Saturday, July 17, 2010 beginning at 9:00 A.M.

The sale will be held at the Cannon County Jail on Alexander Drive in Woodbury and will include cars, trucks, motorcycles and 4-wheelers.

“Our last sale was held in October 2008 and we have accumulated a number of vehicles through seizure or abandonment,” said Sheriff Billy Nichols. “These vehicles have been awarded to the department through an Judge’s order in Circuit Court. Our impound lot was getting full and we little space left to store vehicles.”

Four vehicles were awarded to the department as a result of a drug case which began in 2008 and concluded in 2009. A 1955 Chevrolet Bel Air 2 door with a 455 cu. in. motor is estimated to be the top selling vehicle in the sale.

“This red ’55 Chevy is a nice car and we know it has over 400 horsepower,” said Sheriff Nichols. “Also part of this drug seizure is a 2002 Harley Davidson Softtail Deluxe, a 1999 Titan motorcycle and a kids Peach Mini Bike. All these vehicles have been stored inside since they were seized in 2008 and have been well kept and in great condition. If you are a biker and looking for a Harley, you should be at this sale.”

A total of 17 vehicles will be sold at the sale “AS IS” with No Warranty. Some are in good running condition and some need repair. The list of vehicles for sale may be changed on the day of the sale.

The vehicles may be inspected prior to sale date at the Cannon County Jail during normal business hours, Monday through Friday from 8:00 A.M. until 4:00 P.M.

Money received from the auction will be turned over to the County Trustee and will be deposited in the Sheriff’s Department’s Drug Fund.

Print
Members Opinions:
dingle
[Delete]
on the car i bid two thousand dollars in cash to the sheriff dept. i really don't think it will sell stright up..... but i am willing to go a little more...