Sheriff: More Could Have Escaped 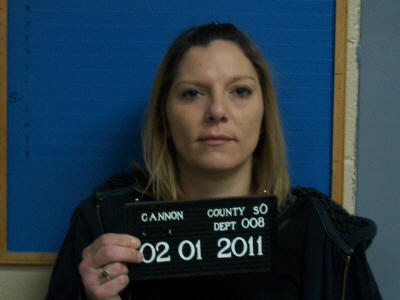 The escape of two men from the Cannon County Jail Wednesday was a crime of opportunity that could have been worse.

Sheriff Darrell Young said Thursday morning that there were 11 men in the exercise yard at the Cannon County Jail at the time two men crawled through a hole in a fence gate, and then jumped over a barbed wire fence.

Sanders was captured along Sunny Slope Road and was taken into custody along with a female subject, Lisa Winslow. Winslow has been charged with aiding and abetting an escapee and is being held on a bond of $500,000.

Sheriff Young said it is not yet known how Sanders and Winslow came in contact Wednesday, but indicated they had a prior relationship and both have been involved in meth making in the past. The sheriff said Sanders had a cell phone on him at the time he was located.

According to the sheriff, Sanders was found sitting along the side of the road and appeared to have injured a leg during his flight from the jail. Authorities were alerted to his whereabouts by a female who spotted him in the back of a truck coming out of Bryant Lane. Winslow had provided Sanders with a change of clothes, Sheriff Young said.

Sanders was in jail on meth-making charges. Both he and Hill, who was charged in March along with his mother and sister with attempted first-degree murder, aggravated arson and especially aggravated robbery, both face additional charges of felony escape.

Hill has also been charged with theft over $500. Sheriff Young said that while officers were concentrating on the search for Sanders in the Sunny Slope Road area, Hill managed to return to the sheriff’s department, enter the workshop in the rear, and steal a camera and police radio from a patrol car.

“My opinion is that when he (Hill) was listening to that (radio) and when he heard everyone go to Sunny Slope he went up Water St,” Sheriff Young said. Hill was captured without resistance near the Woodbury Church of Christ.

The sheriff believes that while none of the other prisoners in the exercise yard escaped one or more likely assisted Hill and Sanders in their effort to flee. Interviews of all inmates who were in the area were being conducted today to find out what happened.

Sheriff Young said the situation which allowed the pair to escape was caused in part by the department being “way understaffed.”

“I need four (additional jailers), but I am asking (the county commission) for two,” he said. “And the camera system (at the jail) is old and worn out.”

As of today there are 83 prisoners being housed at the jail, 56 males and 27 females. It is a 46-bed facility. The 27 females are held in a cell which has only eight beds.

The prisoners were being kept in the exercise yard at the time of the escape while repair work was being done to one of the cells.

“We had a problem in these guys cell. They were tearing things apart and chipping holes through the wall because it adjoins the women’s cell. They tore the metal stripping off the bottom of the door and were sharpening shanks out of it.

“We had maintenance come in to try to fix the problem. They (prisoners) usually get an hour a day outside but they were out there a lot longer (on Wednesday) and knew that no one was monitoring the camera,” Sheriff Young said.

The Budget Committee of the Cannon County Commission has been considering the sheriff’s request for two additional jailers. They are scheduled to meet tonight at the Cannon County Courthouse to finalize their recommendations on the 2011-2012 budget which will be presented to the full commission on July 16.

Print
Members Opinions:
[Delete]
Why not just fix the fence?
TnT
[Delete]
@lilly..Fix the fence? There are 83 prisoners housed in the jail. It states the jail is a 46 bed facility. Also, new camera's are needed and obviously more jailers are needed. I think this should be taken care of before a new building for a fire station is bought or anything else for that matter. All of our family's safety is at risk. I can't believe anyone would say.."Why not just fix the fence?" Incredible!
[Delete]
TnT--Two Questions--If the inmates had seen the hole in the fence why didn't a Deputy or a corrections officer see the same thing! If the Inmates knew that cameras were not being watched how did they know? (If the report is correct) New camera's will not help. We keep on with this we will have more people working at the Sheriff's Dept than we have INMATES! Spending money will not help - FIX THE PROBLEM! OH MY TAXES JUST WENT UP!!!
spankytn
[Delete]
83 Inmates in a jail designed to house 47, twice the workload on 2 corections officer's per shift. Where the roof has leaked into the electrical system for years. Where the electrical and plumbing are outdated. Where equipment such as cameras fail on a regular basis and have been patched back together for years. This building is in serious need of repair. The jail needs more corrections officer's per shift. The employees have not seen a raise in 4 years. Where cheaper (to the employee) and better medical insurance was denied, family medical costs a employee over $500 a month, but employees are required to work double the load. Funny how the City budget was passed on the first reading. City employees make on a average $2.00 more a hour then County. City employees medical insurance is paid for them and a family policy is cheaper. City has a very nice (up to date) building to work out of. I wish the County cared about it's employees as much as the City does. I'd like to think the residents of Cannon County would rather pay higher taxes then worry about their safety.
TnT
[Delete]
lilly did you read the whole article? We need more officers! Plain and simple!If they had more officers and newer cameras (that work)they would have seen them trying to escape. They would have been supervised. Nobody likes to see taxes going up, but spending money is the ONLY way to fix the problem at this point.
[Delete]
TnT- I agree with what you are saying but it is what it is. We have no money. Less SUV'S and a drug Dog that we don't need or can afford would be a good start in cost cutting. Spankytn how many of those 83 inmates are Sate prisoners? That is why the State does not keep them because they loose money and why should the overtaxed people of Cannon County lose what little money we have. I have not had a increase in pay in almost 5 years and I pay for my own insurance. I would hate to think what we needed if 3 inmates had escaped!
[Delete]
The sad thing about the lady in this picture is that she has been in and out of jail since I was in highshcool. If there is someone like this why not do something with her rather than keep letting her off the hook. Maybe if Cannon County really punished their "bad" people and showed them who is really boss then those "bad" people may not stay in so much trouble.
spankytn
[Delete]
To answer your question Lilly, there are 7 state inmates in the jail at the present. As of Monday morning 92 inmates total.
spankytn
[Delete]
The SUV that the K-9 Officer uses and also the K-9 dog were purchased from the drug fund. Which means the drug dealers in Cannon County paid for that, it didn't coime out of the General Fund.
punkin01
[Delete]
This Young lady isn't all bad she needs someone in her life that will support her & try to help her get on the right track.She needs to get away from all the people she hangs around & try to get with people that does not engage in this time of behavior & activities.....I still have faith & believe in you Lisa!!!