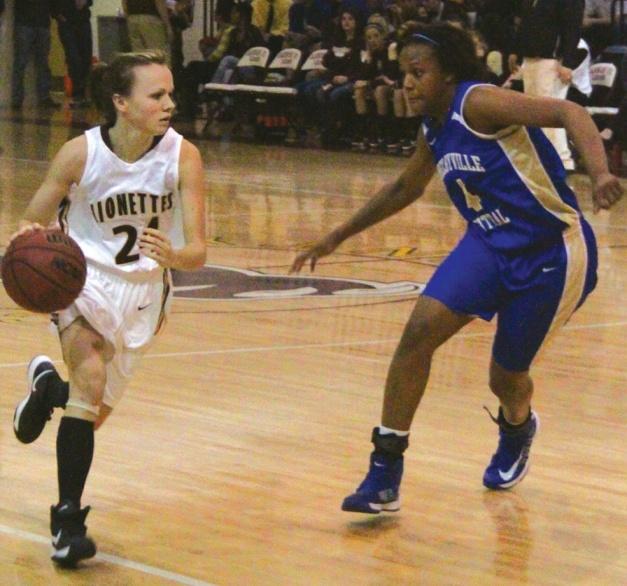 Shelbyville does not strike fear in its opponents like days of old.

Cannon County proved as much when it vaulted to a 8-0 lead against the Golden Eaglettes during the Mitch Wilson Thanksgiving Classic at CCHS Friday (Nov. 23).

Shelbyville is still Shelbyville, and the Lionettes were reminded of as much as they clawed their way to a 44-41 win against one of Class AAA's most storied programs.

"A team with the tradition Shelbyville has is not going to quit," Cannon County Head Coach Michael Dodgen said. "That tradition was put in a long time ago by (current MTSU women's basketball coach Rick Insell). We jumped out 8-0 and it was really easy for us. I think we got in this mentality that we didn't have to keep playing hard."

As a result, Cannon County (4-0) let Shelbyville hang around but the Lionettes still found a way to win in the end.

The Lionettes continue to get solid contributions off of their deep bench. Madison Walkup and Rebekah Faulkner continued their consistent play with 14 points on 60 percent shooting between them. Walkup, who would come up with key plays down the stretch, finished with nine points on 4-of-6 shooting. Faulkner added five points and pulled four rebounds. Jordan Hollis had another solid game. She handled the Golden Eaglette pressure well, scored four points and knocked down two pressure-packed free throws with 17 seconds remaining to stretch the lead to three.

"It's a win against a Class AAA school, but we just have to keep getting better," Dodgen said. "We have been getting contributions off of the bench. We felt like depth would be a key for us this season and that has proven to be true early. Madison had another good game, and Faulkner has been strong in the paint."

The Lionettes had to make plays down the stretch to secure their third win against a Class AAA foe in four games.

Walkup, a junior who is flourishing in her most extensive role as a Lionette to date, came up big in the final five minutes. Shelbyville had pulled to within 36-32 following Tameka Braden's basket with 4:49 remaining.

Walkup answered with a baseline drive that extended the lead back to 38-32 with 4:08 remaining.

Rhianna Horner's offensive rebound and putback got Shelbyville to within 38-34 on the next possession, Walkup scored on an inbound play to push the advantage back to six, 40-34, with 3:11 remaining.

Horner, who scored nine straight in the final 3:31, knocked down a 3-pointer to narrow the deficit to 40-37, but Sissom's driving layup kept it a two-possession game with 1:59 remaining.

Things got interesting in the final minute.

Horner collected an offensive rebound and scored to close the gap to 42-39 with 1:38 remaining. She followed a Lionette turnover with two free throws to get the Lionettes to within 42-41 with 40 seconds remaining, but Hollis stepped to the free-throw line for two pressure-packed charity tosses and drained both to push the Lionettes' advantage back to three, 44-41.