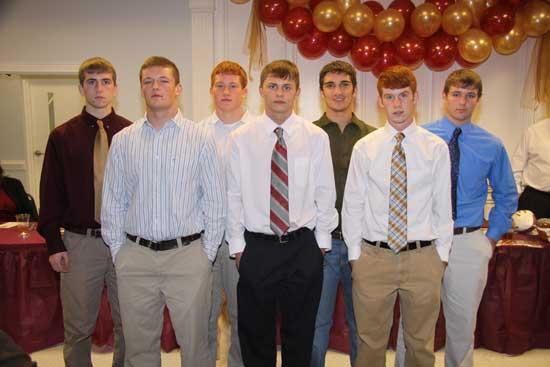 Cannon County's football players showed grit and determination during a trying 2010 campaign and several individuals reaped the rewards of persistence and resolution when league coaches voted on the All-District 8-AA team last week.

Seven Cannon County football players have been named to the All-District 8-AA team and will be honored, along with student-athletes from the league's five other schools, at a banquet in Cookeville, Dec. 5.

Three Lions - Gabe Walkup, Colin Jones and Jordan Linder - received superlative awards while four others were named to either the first- or second-team.

"These guys worked hard and coaches of other teams in our league recognized what they did because they not only saw the effort when we played them, but also were able to see it consistently when they watched tape of other games," Cannon County Head Coach Joel Schrenk said. "When you give great effort it doesn't go unnoticed."

Walkup was voted the district's top running back after rushing for 1,080 yards and seven touchdowns on the ground in 2010. The senior workhorse also had a team-best 20 receptions for 219 yards and two more scores.

"It's an honor to be named to the All-District team so I appreciate the coaches who thought I deserved this award," Walkup said. "I couldn't have done what I did without my teammates so it's a team award."

Jones was named District 8-AA's Best Punter after averaging 35 yards on 32 punts with a long of 54. More impressive was Jones' ability to pin opponents inside the 20 and keep the ball away from opposing return men. He was a two-way player in his only season of high school football.

"Colin wanted to come out this year and we are glad he did," Schrenk said. "He did some good things as a first-year player and he had the big touchdown against Upperman in the last game. We didn't always take advantage but Colin did a great job punting the ball for us, pinning teams back and doing his part to play the field position game."

Linder, a junior, was named District 8-AA's top tight end after a breakout season. His 16 receptions were second on the team with a touchdown included. Linder proved to be a reliable target who improved as the season progressed.

Simons was a two-way player for the Lions. An all-district selection at tight end last season, Simons earned recognition for throwing the ball after making the move to quarterback in 2010. He threw for 818 yards and four touchdowns. Simons also made his presence felt at the safety position where he was third on the team in tackles, had one interception and three deflections.

McLaurine was part of an offensive line that paved the way for Walkup's milestone rushing season. He was one of three underclassmen to be voted to the team in their first year of high school football, along with Osborne and Ryan. Osborne was another solid two-way player from the outset, and Ryan steadily developed throughout the season and progressed into a force down the stretch.

Print
Members Opinions:
[Delete]
Way to go guys!!!
[Delete]
Football is the ultimate team sport but it is nice to see deserving individuals rewarded and recognized for their contributions within the framework of the team.