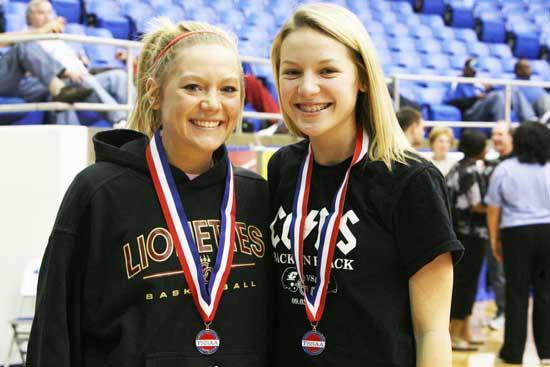 Cannon County was well represented on the TSSAA Class AA Girls All-State Tournament Team, announced after the completion of the championship game Saturday.

Lionette sisters Emily, left, and Abbey Sissom each earned a spot on the All-Tournament team after helping lead Cannon County to the semifinals of the Class AA Tournament.

It represents Cannon County's highest finish in the state tournament since 1989 when they won the Class AA State Championship.

Emily Sissom, a Union signee, completed her career as Tennessee's all-time leader in 3-point field goals (381) and a member of the Lionettes' 2,000-point club.

Print
Members Opinions:
[Delete]
Congratulations to these two young ladies on their outstanding achievements this season. Certainly, it had to be a special time for Emily and Abbey as they not only had the opportunity to play one varsity season together, but they also did it playing for one of the best teams in the state. Congratulations to Emily and Abbey, as well as the entire Lionette basketball team on a great season.
mkjomurf
[Delete]
did any other Cannon County Lionettes make all state team????
ssconnection
[Delete]
they should have
[Delete]
No, only two players made the team which is about the norm for a team that reaches the semifinals. It's hard to get any more than two b/c of the number of players honored from the championship teams.
sheabombay
[Delete]
Congratulations girls! Very proud of the entire Lionettes team! WE ARE CANNON!
mkjomurf
[Delete]
wow surprise that the district 8AA MVP didn't get consideration, once again she contributed ...thougth she played well both games and through out the entire playoff series...guess it's about selling the story...great for the sister's, but i would have to give some love to #34.
titleist1
[Delete]
Congratulations on receiving their all-state t'ment team. These 2 ladies work very hard to get to this point. I'm so proud of the team for what they accomplished this season.
[Delete]
To mkjomurf, the District 8-AA MVP(s) were not in the state tournament. Biles (Upperman) and Sells (Livingston) were the District 8-AA MVPs. While I agree it would have been great to have three on there and I also wish there could have been room for No. 32 and No. 23 but there are only so many spots. Just so you are educated on the All-State Tournament team, the entire playoff series has nothing to do with the All-State Tournament team. Only games played during the state tournament are considered. As for "selling the story," there is an All-State Tournament Committee selected prior to the Tournament. These are people that watch each game and then select 10 players from the field. That's pretty tough. 10 players from this outstanding pool of players from eight great teams. The committee members have no connection to teams or respective communities. It is a unbiased group of voters, so it has nothing to do with selling stories or playing favorites. It's tough to pick the best 10 players from the field but I thought this group nailed it for Class AA in terms of consistency. Had Cannon County reached the finals there would have been at least three girls on the team but it's hard to recognize three girls from one team when that team did not reach the finals. Keep in mind, this is not based on the entire postseason, just the state tournament - thus All-State Tournament Team. Hardware is unnecessary to make me any more proud of all the girls than I am; however, I was thrilled Cannon County had two representatives on the team. And, always remember, there would be no individual representation without TEAM success so when Cannon County received two honors it was a testament to what the team did all season to reach this stage.
[Delete]
Congratulations to the Sissom Sisters AND the team. They gave us a great season and made us proud whenever we walked into a gym.
[Delete]
To Stinnett, Good statement and a great job covering these teams all season! Thank you.