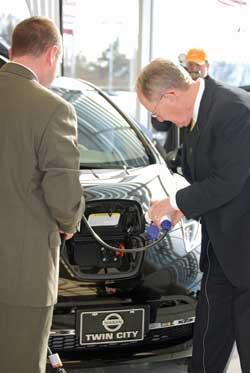 ALCOA, Tenn. – U.S. Senator Lamar Alexander (R-Tenn.) today took delivery of the Nissan LEAF he is leasing from Alcoa’s Twin City Nissan, saying, “Plugging in my new LEAF will give me the patriotic pleasure of not sending money overseas to people who are trying to blow us up.”

Alexander said, “The Nissan LEAF is easy to drive, it’s cheaper to drive – and it will be made in Tennessee. If enough Americans bought electric cars and trucks, that would be the single best way to reduce our dependence on foreign oil – and the best way to avoid $4-a-gallon gas.” The LEAF will be produced in Smyrna.

Alexander visited the dealership this morning where he signed the lease on his new 2011 LEAF, which he is paying for personally. Alexander said he would not accept the state and federal tax credits available to those who purchase all-electric vehicles.

For the past two years, Alexander has driven a Toyota Prius that he converted into a plug-in electric vehicle, which he charged at home by plugging it in at night.

Alexander was the lead Republican cosponsor last Congress of S. 3495, the “Promoting Electric Vehicles Act of 2010,” which aimed to speed up the introduction of electric cars and trucks throughout the country in an effort to reduce American dependence on foreign sources of oil and help clean the air.

Of the bill, Alexander said, “Republicans and Democrats agree that electrifying our cars and trucks is the single best way to reduce our dependence on foreign oil. Our goal should be to electrify half our cars and trucks within 20 years, which could reduce our dependence on oil by about a third, from about 20 million to about 13 million barrels a day. According to a Brookings Institution study, we could do this without building one new power plant, if we plugged our cars in at night when the country has huge amounts of unused electricity.”

The legislation passed the Senate Committee on Energy and Natural Resources on July 22, 2010, by a bipartisan vote of 19-4. Alexander is currently working on new electric-vehicle legislation to introduce during the 112th Congress.

Print
Members Opinions:
mistyec
[Delete]
Green cars use coal based electricity. Nikola Tesla, anyone?
kktaylor
[Delete]
nobody is saying how much your electric bill will go up to - mine is already high enough & where do i plug in at away from home - in the office - bring a long extension cord with me?