Self Storage: Arrest Made In Mini Barn Theft 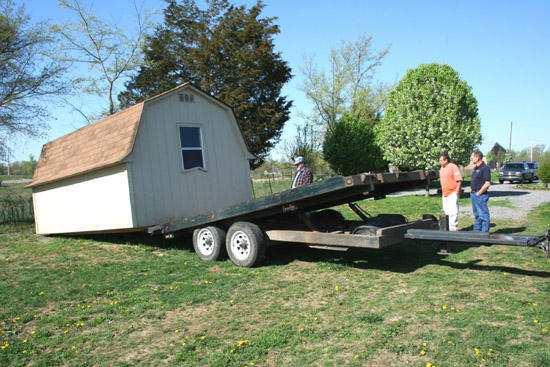 John from Martin Mini Barns, Danny Brown and Sheriff Billy Nichols loading the barn Friday morning.
A McMinnville man has been arrested and charged with the theft of a mini barn in Cannon County on April 2, 2010.

Robert Lynn Self, 30, of 130 Goff Road, McMinnville was charged with Criminal Trespass and Theft Over $1,000 on Wednesday, April 7. He posted a $7,300 bond and was released and will appear before Sessions Judge Susan Melton on Tuesday, April 20 to answer the charges.

According to Sheriff’s Investigators Charlie Wilder and Vance Walker, Danny M. Brown reported the theft from property he owned at 4006 Stones River Road. The 10x16 structure was beige with a brown shingled roof.

“Assistant Police Chief Darrell Young notified us that the barn had been stolen from the property. Lt. Brad Hall received some good information on the description of the truck and trailer that was seen on Stones River Road hauling a mini barn,” said Wilder. “We later developed Mr. Self as a suspect and brought him to the Jail for questioning. In the interview he told us where the barn could be found.”

Investigators Wilder and Walker later proceeded to a farm on Joe Blanton Road in the Short Mountain community where the mini barn was found. On Friday, April 9 Mr. Brown took possession of his property and moved it back to its original location.

“My department worked quickly on all the leads we had in the case and locating the suspect,” said Sheriff Billy Nichols. “We are glad we were able to return Mr. Brown’s property.”