Second half sparks Lions to victory 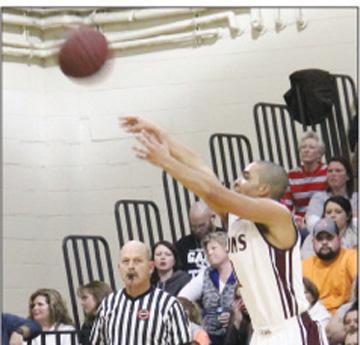 RONNY BURKS photo Tommy Mitchell fires up a shot against DeKalb. The Lions won to remain atop the district standings.

The Lions were guilty of sleepwalking through the first half but they woke up in time to easily dispose of the Tigers, 67-48, to complete the season sweep at Robert A. Harris Gymnasium Friday (Jan. 24).

“I know it’s a cliche’ but you have to take them one at a time and this was a big one,” Lions head coach Matt Rigsby said. “DeKalb is always a tough game and it’s a big game for the teams and our fans.”

DeKalb Co. (11-10, 2-7) had its fans thinking upset when the Lions went into the half clinging to a 25-20 lead.
Then Jacob Nave came to life. The junior forward scored 10 of his game-high 18 in the pivotal third quarter. He helped lead a turnaround in the game that saw the Lions take complete control. They led 45-30 after the third quarter and were never threatened down the stretch.

As Nave was dominating the boards and scoring, DeKalb couldn’t answer against a stiff defense. In fact, Nave’s 10 third-quarter points were as many as DeKalb Co. scored the entire quarter. Nave just missed a double double with nine rebounds.

“I was just in position to make some plays and I tried to do my part to help the team,” Nave said. “It was a big game in the district race so we had to step up.”

Two juniors - Nave and Josh Ruehlen - led the Lions. Nave’s 18 was complimented by Ruehlen’s 16. In fact, Ruehlen had a complete game. His 16 points came on 5-of-7 shooting from the field. He also had four rebounds and two assists.

“Those two really stepped up,” Rigsby said. “This is how it’s been all season with our team - different people stepping up different nights. (Nave) has been one of our most consistent players and he did again tonight.”
The Lions relied more on creating fast-break opportunities and running offense to get better looks. They only attempted eight 3-pointers, connecting on three. They shot 50 percent (18-of-36) inside the arc.

DeKalb Co., on the other hand, couldn’t score consistently against the Lions defense. They had 13 field goals for the game, shooting 13-of-50.

Though in control throughout the second half, Cannon County still had to win the game at the free-throw line. The Lions attempted 21 fourth-quarter free throws, connecting on 18, for 86 percent. They were 22-of-30 for the game. Nave (6-of-8) and Ruehlen (5-of-6) combined for 11 free throws.