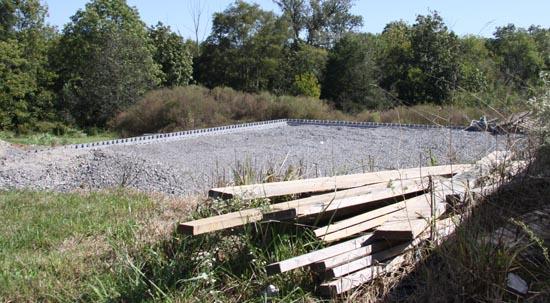 The future site of CCHS's new carpentry building.
Momentum — and money — just keeps building toward the construction of a building to house the carpentry class at Cannon County High School.

After hearing a request from instructor Ed Coats for additional funding, the Cannon County Board of Education approved $22,000 toward completion of the project Thursday night at their monthly meeting.

That comes on top of $16,000 the board approved for the building last year. However, $3,650 of that has not yet been spent due to construction delays, Coats said.

The foundation for the building was laid last year, Coats said, and added the next step would be to "rough in" the plumping pipes and electric lines, followed by the pouring of concrete floors.

Also Thursday night the board:

• Deferred until next month's meeting a request by Ester Stembridge, the mother of a third-grader at Short Mountain School, to waive the $800 fee charged to families of students who live outside of Cannon County.

Her son has been attending Short Mountain since Pre-K, at which time the family lived in Cannon County. They have since moved a short distance over the county line into Warren County.

The motion to defer action was made by board member Shannon Davenport, who said more research on the situation needed to be done.

Mrs. Stembridge said that her family, like many others, is experiencing financial difficulties during these tough economic times and can not afford the fee right now.

Any action the board takes may cause repercussions, as it is believed there are more children who live outside the county attending local schools and not paying the fee. There are also several out-of-county families, with kids attending Cannon schools, who are paying the fee.

• Approved a request from Shelly Walkup to use the Veterans Memorial Gym for a Cannon County Lions Football Boosters fundraiser. The gym, which is located in the old high school, is owned by the school system.

• Approved a requested from the Cannon County Youth Basketball Association, represented by Greg Mitchell and CCHS coach Matt Rigsby, to use the Veterans Memorial Gym for league play this year. The league promised to perform upgrades to the gym at its own expense and to limit and keep track of the issuance of keys.

• Heard from Connie Foster a brief overview of the Counseling Support Services pilot program. Foster is Director of Coordinated School Health. The pilot program is being done in conjunction with the Jason Foundation and provides 24/7 telephonic counseling services to children age 12 and up and their parents or guardians. Studies have shown that "telephonic counseling proofs to be quite effective," Foster said.

• Approved the following items on the Consent Agenda: the minutes of the September 10, 2009, Regular Meeting of the Board; Elementary Basketball coaches and practice schedule; cheerleading practice schedule; E4TN program; copier lease for CCHS; three field trips; and a resolution amending the 2009-2010 GP Budget.

Also Thursday, Director of Schools Barbara Parker announced she will be addressing the Cannon County Commission when it meets Saturday, Oct. 17. One of the topics she is likely to discuss is the greenway project being planned by hundreds of students in scores of classes at CCHS. The proposed greenway would provide an exercise and hiking/biking trail from the Arts Center to the high school.

Parker also awarded certificates of recognition to: CCHS student Zac Barker, for his election and service as president of the state BETA Club; Emily Sissom, a CCHS junior who recently signed a full scholarship to play basketball at Union University, CCHS student Marissa Kugler-Norrod, who was recently awarded the "Heroes in the Making" scholarship; and the CCHS band and drum line for its fourth and first place finishes, respectively, in a recent competition held in Lebanon.

The next School Board Workshop will be at the Central Office on November 10, 2009 at 6 p.m. The next Regular Board Meeting will be November 12, 2009 at Westside School at 6 p.m.

Cannon County High carpentry students are well on their way to completing work on a new 40' x 60' building with the laying of the foundation almost complete.

Local businesses chipped in and volunteered their time, equipment, and materials to help make this project work.

Program Director Ed Coats says the students hope to have the walls and ceiling up this year and get the new building finished next year.