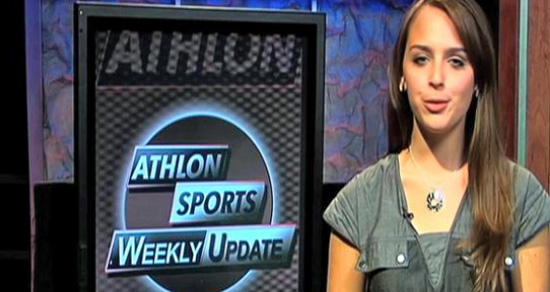 MURFREESBORO – Each time Sarah Fryar takes to the airwaves, she reaffirms the value of hands-on experience by students preparing for challenging, fast-paced careers. The senior from McMinnville is the anchor for "Athlon Sports Weekly Update," which is recorded at Middle Tennessee State University.

The short recap of the week's top sports stories was launched in October in conjunction with the debut of Athlon Sports inserts, which are now featured in nearly 500 newspapers across the country, including the Cannon Courier.

Nashville-based Athlon is best known for its seasonal preview magazines of professional and major college sports that are sold at newsstands nationwide. The company's game plan for "Weekly Update" is to offer the video to the nearly 500 newspapers that carry Athlon Sports, enabling the local publications to have a stronger multimedia presence on their websites.

"One minute, I had no idea what my next thing was going to be, and the next minute, I had an internship and a very promising future with the company," says Fryar of her unique part-time job.

Journalism is in Fryar's DNA. Her father, Ron Fryar, is the publisher of the Murfreesboro Post and owner of Woodbury's local newspaper, the Cannon Courier. But the younger Fryar's nose for news always led her toward sports journalism, a field that is still trying to play catch-up in its acceptance of women.

An admirer of ESPN's Erin Andrews, Fryar also respects the network's Rachel Nichols, Pam Oliver of Fox and Tracy Wolfson of CBS. However, she is equally critical of stations and networks that hire female sports reporters more for their hotness quotient than their knowledge and professionalism.

Athlon Senior Vice President of Newspaper Relations Jerry Lyles says, "Our goal when Sarah graduates is to hire her as a full-time employee. "She's very conscientious. She does not need a lot of guidance. She's competent, creative and a good writer. It's amazing because you don't expect to get the complete package from a 21-year-old still in college."

Fryar writes her own script, but she also has experience behind the scenes. She says that gives her a necessary insight that results in great respect for producer Kurt Mullen, a senior electronic media communication major from Jackson, and the other MTSU students who gather at 9:30 p.m. each Monday to record another program.

"My parents always told me, 'When you get your license, you're going to learn to drive a stickshift before you drive an automatic,'" Fryar says. "I have that exact same opinion about broadcasting. You need to know how to do everything behind the scenes before you go in front of the camera so you know how everything works."

Lyles says the partnership between Athlon and MTSU enables his company to avoid cost-prohibitive production expenses while providing future broadcasters with a preview of the profession.

"I was surprised with the quality of the product the students put out, and the level of quality has increased," says Lyles. "We would like to continue to work with the university to help them get some good career experience that will help them down the road. Hopefully, some of them will be with us when they graduate."