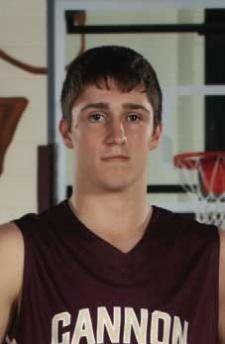 Cody Ruehlen
Cody Ruehlen doesn't draw attention as Cannon County's best player and he may not dominate the headlines, but few teams ever win championships without players like him.

There's a long way to go before Cannon County worries about championship talk but legitimate aspirations exist because of players such as Ruehlen, who continues to go about his business doing all the little things that help create special seasons.

Ruehlen turned in another inspiring performance to help keep Cannon County (6-0) perfect in six games with a 64-51 win against Smyrna in the Mitch Wilson State Farm Thanksgiving Classic at Robert A. Harris Gymnasium Saturday.

The 6-foot-3 Ruehlen produced a double double with 11 points and 11 rebounds and also supplied four assists and three steals as Cannon County jumped in front of the Bulldogs early and never relinquished the lead.

"Cody is a solid player and a great teammate," said fellow senior Jared Nave. "He doesn't always get the credit he deserves, but Cody doesn't play for that. He plays to win."

Nave wasn't too shabby against Smyrna. He led the Lions in scoring with 21 points, grabbed eight rebounds and dished out three helpers in another strong effort. Justin Davenport was the only other Lion in double figures with 18 on 7-of-12 shooting.

As a result, Cannon County passed its challenge of playing two up-tempo games in consecutive nights and did so against a Smyrna team with fresh legs. The Bulldogs were playing their only game of the tournament after bowing out of Friday's scheduled game to attend the school's football playoff game in Memphis.

"The main thing is overall it was a great tournament," Cannon County Head Coach Matt Rigsby said. "We played two quality opponents (Smyrna, McMinn Central) and Smyrna is still missing some of their football guys but, in saying that, I will not take away from our guys' effort. It is hard to play back-to-back games at 9 p.m., and the guys did a good job with that part of it."

Cannon County started strong and jumped out to a 13-5 lead when Ruehlen battled for an offensive rebound, gained possession and converted the basket. One possession later Nave collected an offensive board and powered it in to stretch the lead to 15-5 and then Davenport's steal and layup stretched the lead to 17-5 with 2:21 remaining.

"That's just all heart, pure heart," Nave said of the team's relentless battle on the boards. "We are often undersized but rebounding is heart and we have that. Our team showed a lot of resilience in this tournament. We beat two good opponents and had two good wins."

Good thing for the heart and tenacity because Cannon County's offense bogged when Smyrna jumped out of its man-to-man defense and employed a 3-2 zone. Generally a strong outside shooting team, Cannon County struggled from beyond the arc and shot just 2-of-13. Only one of the treys came after the Bulldogs switched to zone.

The Lions managed just four second-quarter field goals against the zone as Smyrna fought to within 27-21 at intermission.

"I really don't know why we struggled against their zone," Rigsby said. "They went to the 3-2 zone and totally locked us up. We've seen that (zone defense) this season so I'm not sure why it was a factor but that's why you play these games. You want to see how your team responds to different things and adjusts to different circumstances."

Rigsby was able to evaluate how the Lions respond to challenges. The Bulldogs closed to within 29-26 early in the third quarter but four different Lions scored in succession, capped by Colin Jones' layup, to stretch the lead to 36-26 with 4:06 remaining in the frame. Smyrna would never get closer than eight from that point as the Lions clamped down defensively and allowed just one field goal during nearly four-minute stretch at the end of the third period.

Davenport and Nave combined for 16 fourth-quarter points to finally dispose of the pesky Bulldogs.

Cannon County will play Forrest at Chapel Hill in a non-conference game Tuesday before opening District 8-AA competition against rival DeKalb County at Robert A. Harris Gymnasium Saturday at 7:30 p.m.

Print
Members Opinions:
[Delete]
Great job Cody and Cannon County Lions!
dailyreader
[Delete]
String music in the Robert A. Harris Gym---nothing better!
CCAC
[Delete]
Nice work coaches and players! Hard work pays off!
lionbasketball
[Delete]
I would agree, Tony does an excellent job covering our young athletes. With that in mind, I would ask Cannon County to no longer drop some quarters in a Daily News Journal box...apparently they have forgotten about us.