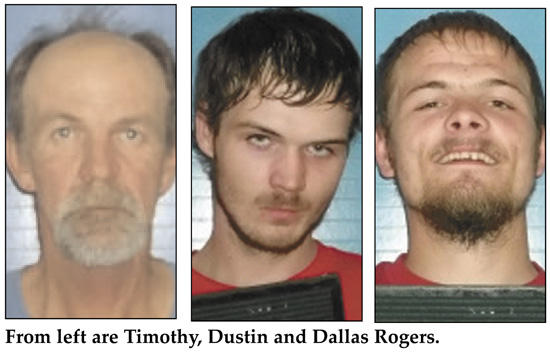 Three members of the same family, a father and two sons, were recently arrested by the Cannon County Sheriff's Department for allegedly stealing scrap metal.

Facing charges of Theft Of Property Under $500 are the dad, Timothy R. Rogers, and brothers Dallas J. Rogers and Dustin R. Rogers, all of 4618 Ferrell Hollow Rd. in Readyville.

The incident began when, on March 15, the purported victim contacted Cannon County E-911 to report the theft of two trough frames and one cattle gate from his property. Deputy Steve McMillen made contact with the victim at Pelham's Auto Salvage.

The victim said he was coming back from Murfreesboro and when he approached the area where his barn was located at he saw a dark green truck going slowly down the road just past the gate to his barn and that it had scrap in it, which appeared to be items from his barn.

He said he went back to his gate and saw it lying on the ground. He said he then went in the direction of the truck and followed it.

Deputy McMillen had already been dispatched to the area of Pelham's Auto Salvage prior to the arrival of the victim. When he arrived he was advised that persons who were in the green truck were unloading items. When the vehicle returned to the office he made contact with the three Rogers.

Timothy Rogers told the deputy he was taking his sons to Pelham's to sell the scrap metal and that it belonged to Dallas. He said he did not know it was stolen.

Dustin Rogers said he was only along for the ride and that Dallas had acquired the scrap the day before.

Dallas first stated that he lied to his father and brother and told them he had permission to be on the property. He then said he did not want to talk anymore until he spoke with his attorney.

Dallas Rogers had a bond set at $1,500. Bond for Timothy and Dustin Rogers was set at $500 apiece. They are all scheduled to appear in Cannon County General Sessions Court on May 1.