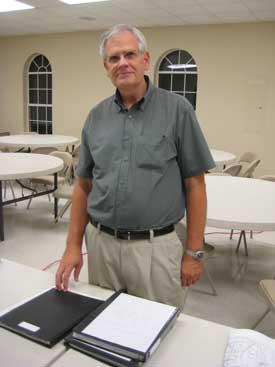 Presenting a program entitled “Early Tennessee History and History of Brawley’s Fork,” Robert Bush delivered an outstanding presentation to those in attendance.

Several from the Woodbury and Bradyville communities attended this meeting to hear Mr. Bush speak of his research experiences and conclusions as related to the settlement of Bradyville and the Brawley’s Fork area.

Much of the same circumstances that led to the development of these settlements also affected the settlement of greater Cannon County.

Even after the one hour presentation was concluded, attendees of this meeting continued discussion in an open forum with Mr. Bush that continued for another hour with the meeting actually concluding at 9 p.m.

One member was heard to express that he learned more about Tennessee history in this one hour presentation than he had learned in a lifetime. Such was the sentiment by others fortunate enough to have attended this particular program presented by one of Cannon County’s own historians.

Mr. Bush has become a respected authority on the history of Cannon County and with special interest on the Brawley’s Fork and Bradyville area which he considers his ancestral home. His research has often been presented in the Cannon Courier and has provided those interested in the county history with much insight with regard to its early settlement.

Meetings of the Auburntown Historical Society are open to the public for attendance. “We strive to bring the highest quality programs available to our community for our membership,” said Danny Nichols, current treasurer and co-founder of the society, adding. “We aren’t just talking about history, but we’re actually making it.”

Nichols noted that after 6 years of existence, the Auburntown Historical Society has become a venue sought out by historians in the area who desire to present programs of interest to the public.

“We welcome visitors, we invite membership,” he said. “People may also follow our progress on our website at:  http://www.auburntowntennessee.blogspot.com