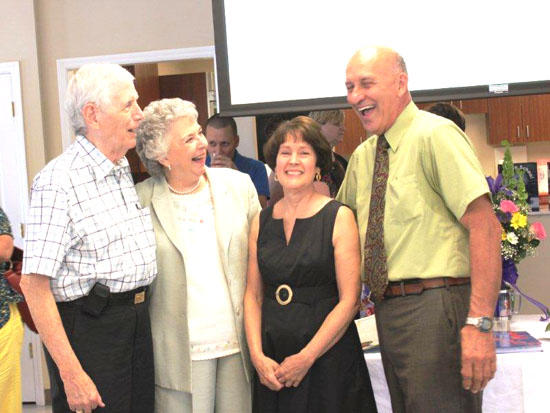 Austin and Carmine Jennings, Woodbury, share a laugh with Roger Turney during his retirement celebration held Sunday, May 23rd at the Auburntown Church of Christ Fellowship Hall in Auburntown.

A retirement reception was held for Roger Turney Sunday at the Auburntown Church of Christ Fellowship Hall.

Turney is retiring from Auburn Elementary after 44 years in education.

During the reception, Turney received a resolution from the Tennessee General Assembly in recognition of his years of service to education and the community. The resolution was presented to Turney by Rep. Stratton Bone.

Following is the resolution present to Turney. An article on the reception will appear in next week's Cannon Courier.

A RESOLUTION to recognize Roger Franklin Turney on the occasion of his retirement.

WHEREAS, it is fitting that the members of this General Assembly should pause to
specially recognize those outstanding educators who have devoted their careers to providing the highest quality education for Tennessee's students; and

WHEREAS, Roger Franklin Turney is one such estimable educator who, having served
with distinction throughout his forty-four year tenure as a teacher and principal, will soon be taking a much deserved retirement; and

WHEREAS, believing deeply in his mission of educating, empowering, and encouraging
all students to achieve their maximum potential, Mr. Turney began his illustrious career in
education with the Middle Tennessee State University Math Department in 1966; and

WHEREAS, after serving with acumen and alacrity at West Mesa High School and the
University of New Mexico in 1974, Roger Turney became the principal of Auburn School, where he has worked assiduously to motivate the students to reach their full potential, both as scholars and as citizens, ever since; and

WHEREAS, in addition to his responsibilities at the school, Roger Turney works
tirelessly to establish a brighter future for the good people of Auburntown by using his
impeccable morals and irreproachable integrity as the Mayor of Auburntown since 1972 and as a member of the Auburntown City Council since 1970; and

WHEREAS, Mr. Turney is also a dedicated civic leader who has distinguished himself as
a public-spirited citizen of the highest order through his work with numerous boards and
organizations, including serving as a charter member and president of the Auburntown Lions Club, Melvin Jones Fellow, board member and president of the DeKalb Utility District, and member of the Community Board of Stones River Hospital, Cannon County Art Center Board, and Cannon County 911 Board; and

WHEREAS, Roger Turney is an active and devout member of the Auburntown Church of
Christ, where he has faithfully served as an elder for twelve years; and

WHEREAS, a gifted athlete and avid runner, Mr. Turney runs in the Cannon Blast each
year and, in 2009, was recognized for being the oldest runner participating in the race; and

WHEREAS, because of his expertise and leadership in the field of education, the Auburn
School Gym was renamed the “Roger Franklin Turney Gym” in 2009, an honor most befitting his outstanding tenure as a principal as it recognizes the positive influence he has had on so many young lives; and

WHEREAS, his many accomplishments aside, Mr. Turney is most grateful for the love
and support he shares with his beloved wife of forty-three years, Shirley Turney; he is also the proud father and father-in-law of Todd and Susan Turney, Cory and Shannon Turney, and Travis and Hillary Turney, and the doting grandfather of Jordan, Lauren, Mackenzie, Brandon, and Jared Turney; and

WHEREAS, Mr. Turney exemplifies the spirit and allegiance to family and community
that are characteristic of a true Tennessean; and

WHEREAS, throughout his estimable career, Roger Turney has demonstrated the
utmost professionalism, ability, and integrity, winning the unbridled respect and admiration of his colleagues, students, and the community at large; now, therefore,

BE IT RESOLVED BY THE HOUSE OF REPRESENTATIVES OF THE ONE HUNDRED
SIXTH GENERAL ASSEMBLY OF THE STATE OF TENNESSEE, that we extend to Roger Franklin Turney our heartfelt wishes for a happy and fulfilling retirement and every continued success in his future endeavors.

BE IT FURTHER RESOLVED, that an appropriate copy of this resolution be prepared
for presentation with this final clause omitted from such copy.