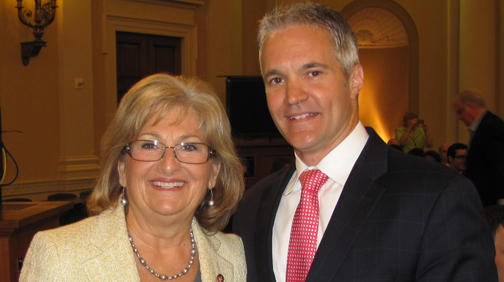 WASHINGTON – Rep. Diane Black (R – TN), member of the House Ways and Means Committee and Oversight Subcommittee, questioned victims of the Internal Revenue Service’s (IRS) targeting of conservative organizations, including Kevin Kookogey with the Franklin, Tenn.  based organization, “Linchpins of Liberty,” that has been waiting 29 months to hear back from the IRS on his organization’s application for 501(c)(3) status, and John Eastman, the Chairman of the National Organization for Marriage. Below are excerpts of Rep. Black’s exchange with these witnesses.

Congressman Black: …It certainly is a sad day for our country. Our founding fathers, set up this Bill of Rights to ensure us that we wouldn't have government that would intimidate the very citizens of the country, so it is a really sad time that we have come to this point… If I could now ask the staff to bring up one of the pieces of information that's in our file here. Mr. Kookogey, I bring this up because this comes as a result of a question that was asked of you and this is question 24 on your questionnaire where they [the IRS] actually asked you the names of those students that you would be educating. Can you give me any thought on why this would be of particular interest in order to establish your 501(c)(4) status?

Kevin Kookogey: No …  it's stunning. It's unbelievable. I can't give an answer. I've been thinking about it for 29 months why they would want to know the names of 7th graders I am teaching western civilization, political philosophy and the basic theories of economics. Why in the world would the IRS want to know names of these students but for perhaps intimidation of them and their parents, to discourage them from being taught under my tutelage?

Congressman Black: Certainly very chilling. Something we wouldn't expect in the United States . . . One of my colleagues said that none of you were silenced .. What I’d like to know … do you feel that what was occurring here in both the intimidation and not getting the status, did it silence you?

Becky Gerritson (Wetumpka Tea Party):I do have members come up to me and they are fearful . . . they don't want to write their name on any sign-up form that we may have. I also have people e-mailing me that they are getting audited for the first time ever, and they gave during the campaign. So, I can't put a number how much, on how it has hindered our organization, but it has, because people have told me.”

Karen Kenney (San Fernando Valley Patriots): We are not silent but there is a fist and a hand over our mouth because our educational opportunities to everything from creating brochures or pamphlets on the Constitution to buying things such as book marks, that educate people about the constitution—that has been limited.

Congressman Black: The point i want to make here . . .  is that your first amendment rights are being violated. Mr. Kookogey, in the time I have left?