Remember The Removal To Ride Through Woodbury 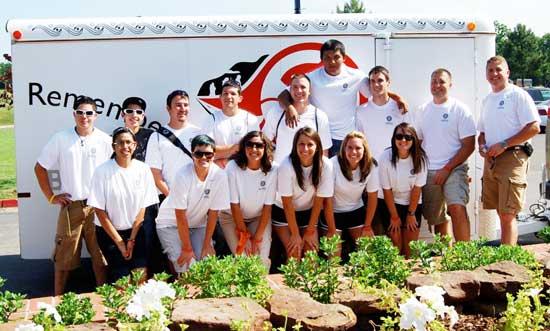 Members of the Remember the Removal Ride in Tahlequah prior to leaving for Rome, Ga.
TAHLEQUAH, Okla. — While many students kick back and enjoy a lazy summer away from the classroom, ten Cherokee students will spend their summer outdoors, peddling and learning about history. The riders will start their journey from New Echota, GA and are traveling through Tennessee during the next week.

Following is a list of anticipated ride dates and locations in Tennessee. Some dates may change without notice due to unforeseen events.

This area was the center of the original Cherokee Nation homelands prior to removal to Indian Territory in 1838-39 and is very important to Indian history. The Remember the Removal ride is a way for the Cherokee Nation to commemorate its history and tell their story.

During the 2010 Remember the Removal Project, a challenging 1,000 mile ride, a group of ten Cherokee students from small communities throughout Oklahoma will cycle their way through the historic Trail of Tears. The group will be riding from the original Cherokee homelands Georgia and ending in Tahlequah, Okla., the capitol of the Cherokee Nation. This is the third such ride to be sponsored by the tribe, with the original ride first completed in 1984 and a very successful 25th anniversary ride held last year.

Organizers say the event provides participants with the chance to experience Cherokee history firsthand and follow in the footsteps of their ancestors. Last year’s riders came away with a life-changing experience.

"There are three things you learn on this ride," said Todd Enlow, group leader of Cherokee Nation Leadership, who also organized and rode in the 2009 ride as a chaperone. "First, you learn Cherokee history by experiencing it yourself; second, you learn your own family history; and third, you learn your strengths and abilities to go beyond what you think you can do."

Enlow added that for the riders, learning their own family history makes the Cherokee history gleaned along the way very personal. The riders will make stops along the way at specific points of interest from the Trail of Tears and will be provided with relevant history lessons to help make connections between the past and what the riders are currently experiencing.

The group has spent the spring training in Oklahoma, both together and separately, and the group set off earlier this week for Georgia. From there, the bike ride begins a couple of days later and will end in approximately 20 days back in Tahlequah. As weather and terrain permits, the group will camp along the route some nights, while other nights will be spent in commercial lodging. Cherokee Nation is supplying riders with a bike, riding gear, meals, transportation and lodging.

This year’s riders include students ages 16 to 36, representing eight different communities. They are:

The Trail of Tears of the Cherokees took place over the winter months of 1838 through 1839. An estimated 16,000 Cherokees were forced at gunpoint to remove themselves and their families from their homes, farms and communities. After being held in federal stockades until deep winter, they were subsequently herded on overland and water routes that moved through territories that represent the present-day states of Tennessee, Kentucky, Illinois, Missouri and Arkansas. More than four thousand Cherokees died along the various routes from the harsh conditions of the crossing. Ride organizers of Remember the Removal hope to promote awareness of these significant events as riders re-visit the areas where the journey took place. Other goals of the Remember the Removal bike ride are to help educate Cherokee students about their tribe’s history and the difficulties associated with the Trail of Tears, and to promote the achievements of the modern Cherokee Nation to those along the route.

To learn more, please visit the official Web site of Remember the Removal, at http://remembertheremoval.cherokee.org. You can watch the group’s progress in real-time, read their blogs and send messages to the group.

Print
Members Opinions:
Harry
[Delete]
Growing up in Woodbury and Auburntown, my mother (Mrs. Betty Morris Odom) told us stories of our great grandfather who was 3/4 Cherokee and our great grandmother who was full Cherokee and where they were buried in unmarked graves just outside of Auburntown. My dad (Mr. Ray Odom) often showed us the historic monument just outside of Woodbury on the McMinnville Highway that told the story of the Cherokee Nation that stopped and camped in a nearby field during their terrible ordeal of the forced march from Georgia to Oklahoma and how Woodbury was part of that Trail of Tears history. Our parents took us several times to Cherokee, NC to witness the pagent about the Cherokee and the story of those who stayed in the hills while other were forced to leave their homeland. While living in Atlanta, we often visited the Dahlonega, GA gold mines which originally belonged to the Cherokee Nation, but were wanted so much by others that the Cherokee were foreced to leave.

Thanks Woodbury for hosting these young Native Americans as they pass through there on the original Trail of Tears. Hopefully, they will benefit greatly from your hospitality.