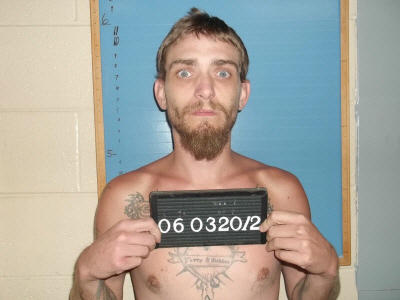 Deputy McMillen, along with St. Randy Neal and Deputy Travis Turney, responded to Reed's residence for a report of a verbal domestic. Upon arrival they were informed Reed had left and was headed toward Mooretown.

The deputies were informed by Reed's sister that he had gotten into an argument with their mother because she wouldn't give him his knives back. She had taken them earlier in the week when he became involved in an argument with his brother.

They then made contact with Reed on the 5000 block of Hollow Springs Rd. He stated he was tired of his family not talking to him and not wanting to take him to look for a job. He stated he was going to 935 Simpson Rd. and talk to Mary Barrett, someone that "would understand" him. He said he would leave his mother's residence if that's what she wanted.

The deputies again spoke with the sister, who stated she felt threatened by her brother during the domestic incident and that she was in fear for her life and safety. His mother said she did not want him to return. Following that the deputies made contact again with Reed at the old Hollow Springs Market and he was arrested.

While Reed was being booked, one of his family members went to a trailer he was staying in on the property and found what they believed to be a meth lab. They contacted the sheriff's department and in response to the call, Investigator Anthony Young obtained a search warrant.

Investigator Young went to the trailer, executed the warrant, and components of a meth lab and items used in the manufacturing of meth were found inside. Investigator Young obtained additional warrants against Reed.