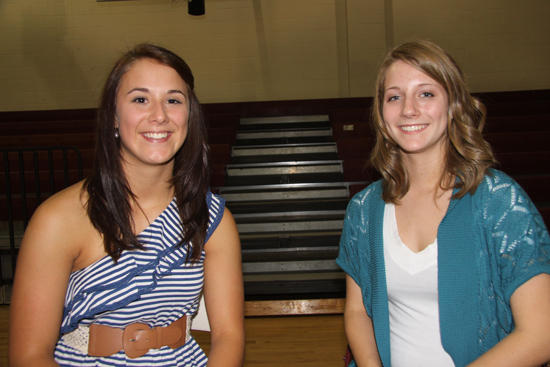 Lindsey Reed, left, and Frannie Jenkins will graduate at the Top of the Class when Cannon County High School holds commencement exercises Friday at 7 p.m. Reed is Valedictorian and Jenkins is Salutatorian.

Lindsey Reed and Frannie Jenkins did not aspire to become the top graduates of their senior class when they began their high school experience.

Doing what their mothers instilled in them landed Reed and Jenkins at the top of their class when CannonCounty holds commencement exercises for the Class of 2012 at Schwartz Field Friday at 7 p.m.

Reed will graduate as Cannon County's Valedictorian, and Jenkins will be Salutatorian as they close one chapter of their life and begin another. The Class of 2012 includes 135 graduates.

Reed, who also starred for the Lionettes on the hardwood, is just the third Cannon County basketball player to achieve status of Valedictorian. She said she was shocked when her name was called over the school's intercom system when the Top 20 students were announced.

"I was shocked when they called my name as Valedictorian," Reed said. "I was hoping to be in the Top 10, but I never dreamed I would be that high. I did not set out to be Valedictorian. I just tried to do what my mom (Greta Reed) instilled in me. Mom is a teacher so she had an influence. I had to do well and I wanted to do well. I don't like to get bad grades."

"I really never tried to be Valedictorian or Salutatorian or anything like that," Jenkins said. "I wanted to keep my grades high because I knew that was important. It just seemed like doing well at school and doing homework is what you were supposed to do. My mother put a great emphasis on doing well in school. I wanted to make her proud."

Reed, who was second in her eighth-grade class at East Side, already has been accepted into Tennessee Technological University and plans to pursue a degree in nursing. Jenkins plans on attending MTSU and becoming a pharmacist.

Reed said she opted for a future in nursing due to the attention and care she received during a junior year that required multiple surgeries.

"I had some really good nurses that helped me through everything last year," Reed said. "Through high school I was really up in the air as to what I really wanted to do but this year I knew what I wanted to do and that experience played a large role in that."

Reed said she was still working on her speech but she was certain it would have a meaning of closeness and family.

"It's kind of sad that high school is ending," Reed said. "I went into my speech thinking about that but then I just started over. This is such a good class because we really are close. I want my classmates to know that you need to stay close with your old friends because new ones may not always be the best answer. We are always going to make new friends but you can never forget your lifelong friends from school."

Jenkins said her speech is complete and that she wants to revisit the many great memories developed.

"High school is a stepping stone and everyone has to do this," Jenkins said. "It is not a sad time. My speech is about the memories we've made and congratulating everyone that makes it this far."

Jenkins said she could not imagine attending a high school other than Cannon County.

"You know all of your teachers and classmates because the classes are smaller," Jenkins said. "I couldn't imagine myself going to another high school. It has been a great, great experience."