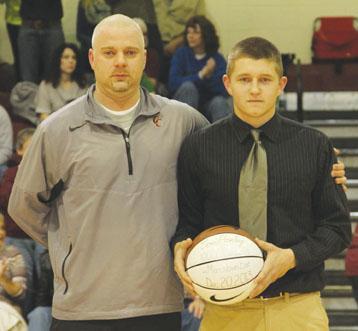 Cory Henley made his mark on Senior Night.

Cannon County’s win, coupled with Upperman’s victory against Livingston Academy, enabled the Lions to clinch at least a share of the District 8-AA regular-season title. They need one win in their final two games to win the title outright.

The Lions play host to Upperman Tuesday and close out the regular season at Livingston Academy Thursday.
Cannon County is gunning for its first district championship since 1997-98.

“One of the team goals was to win the district championship,” Lions Head Coach Matt Rigsby said. “We haven’t achieved that yet. We have a piece of it but we need to finish it.”

Henley made sure the Lions came away victorious in a key game against York (13-8, 7-5). He was 8-of-15 from 3-point range and moved up two spots into fifth on the Cannon County career scoring list with 1,204.

Tanner Larson was also strong on Senior Night with 14 points on 7-of-9 shooting. He also pulled seven rebounds.
Seniors Tommy Mitchell and Dalton Ryan, along with Henley and Larson, were honored before the game.

The Lions came out strong and shot 13-of-28 in the opening half, including 6-of-11 from 3-point range, to build a 35-25 halftime lead. They ambushed the Dragons in the second half, outscoring them 39-21 to pull away for the victory.
“We put together a pretty complete game,” Rigsby said. “We played good defense, got good looks and converted. It was a good for the seniors to enjoy that type of Senior Night.”