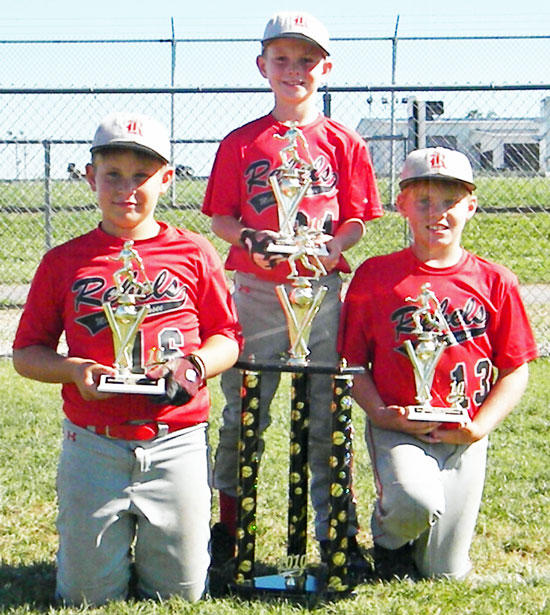 They played hard and in the end it all paid off. They finished off Saturday with 3 wins against the Middle TN Inferno, Powell Power, and Mt. Juliet Grizzlies scoring 46 runs and only giving up 15 runs. Local Rebel player, Jacob Raines, hit 2 home runs over the ballpark's fence.

Their first Sunday game at noon against the Middle TN Inferno was a very tough game with the first 4 innings being played in the pouring down rain. They were down 7-4 going into the bottom of the 6th inning. With bases loaded and Matt Calamia on second base Elijah Pope hit a hard ball to center field. Christian Miller and Matt Calamia scored even after getting tripped up by the Inferno third baseman putting the Rebels up by one for the 8-7 win going into the Championship vs. the Gallatin Storm.

The weather for the Championship game was beautiful but a little windy. With the score teetering back and forth for the lead in the bottom of the fifth inning the Rebels being up by only 1 needed 7 runs to end the game via run rule. With bases loaded and Branden Schwartz on second Matt Calamia came up to bat and hit a hard ball to left field scoring the runner on third and Branden Schwartz for the winning run to end the game and WIN the Championship.

Congratulations to Jacob Raines for hitting a total of 5 home runs this weekend over the ballpark's fence.

The Middle Tennessee Rebels will go into the SYSA State Championship next weekend in LaVergne on a hot streak winning 15 of their last 19 games and finishing first, second, and third in the last 3 tournaments they competed in. Congratulations to all the boys. We are very proud of you all.