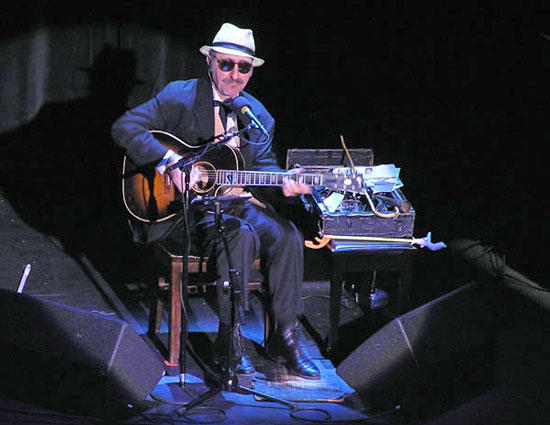 The Arts Center of Cannon County presents
The One, The Only, Modern-Day Music Legend
Leon Redbone
Vaudeville, Ragtime, Jazz and Blues
Tuesday, March 2 at 7:30PM

It’s rare to find anyone in the annals of popular music more difficult to define than Leon Redbone. Initially, at the core of his career was the desire to simply honor songs from the past, which established him as the sole curator of the museum of 20th century music. But over the course of his career, Leon has flirted with numerous styles ranging from classical, to delicate blues, to tormented tangos, to Hungarian folk music.

While his gravelly baritone and omnipresent fedora, dark glasses and Groucho Marx moustache make him one of the more distinct and recognizable characters in popular music, it’s three decades of performing and his unique finger-picking guitar style that has made Leon Redbone a legendary performer. Coupled with an unmistakable voice reminiscent of Bing Crosby, Leon Redbone is a modern-day music legend. This famous neo-vaudeville crooner has collaborated with many notable artists including Merle Haggard, Don McLean and Ringo Starr.

When performing live, his musical repertoire can hover between Dylan’s “Living the Blues,” to Jelly Roll Morton’s “ I Hate a Man Like You,” to Eddy Arnold’s “Bouquet of Roses,” to the childhood favorite, “Polly Wolly Doodle.” He is most comfortable being defined as ‘every man’s performer,” but his audiences categorize him as “great.”

Leon Redbone is part of the Coach Micheal Burt Concert Series. Ticket prices are $20 for adults, $18 for seniors, students and groups of ten or more. The Arts Center is located on 1424 John Bragg Highway, just west of the town of Woodbury, approximately 20 minutes from Murfreesboro, Manchester, and McMinnville and one hour southeast of Nashville. Office hours are 10:00a.m. to 4:00p.m., Monday through Saturday. For reservations or more information check our website at HYPERLINK http://www.artscenterofcc.com www.artscenterofcc.com or call 615-563-(ARTS) 2787 or 1-800-235-9073.