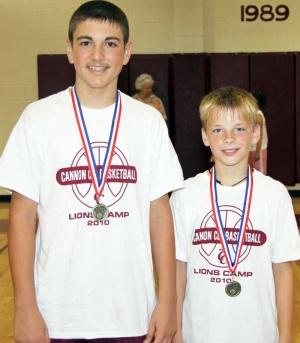 Bo Bryson, left, and Briar Jakes won the 3-point shooting competition at the CCHS Boys Basketball Camp.
Take one look inside the Cannon County High School gymnasium during the last week and you would be hard-pressed to realize the economy is still not stable.

When money is tight the first thing families generally cut are the non-essentials (i.e. vacations, summer camps, luxuries), but with more than 100 youngsters combined at their respective camps (during the week of June 7-10), Cannon County High School basketball coaches Michael Dodgen and Matt Rigsby consider themselves – and their programs – fortunate.

In fact, the boys’ camp doubled in size to 54 campers for the 2010 summer, while the girls also saw an increase in attendance with 51 youngsters participating.

Perhaps part of the reason is the quality instruction the youngsters receive and the fact both high school teams are coming off stellar seasons with several returning players (who worked the camp) probably doesn’t hurt.

“We consider ourselves very fortunate to have this type of turnout for the camps,” Dodgen said. “We know these are tough times so we appreciate people considering our camps. The hope is that the camps are a benefit for the young people and it is also an investment in their (basketball) future because we provide a lot of instruction, drills, competition and teamwork – all areas of importance as they progress in basketball. Of course, these are also great life skills and that’s important, too.”

Rigsby was delighted with the abundance of campers who spent the week developing their skills through the assistance of Cannon County High School coaches and players.

“We doubled what we had last year and, of course, that allows you to get more done and break the kids into groups where they are competing and working with players of the same level in most instances,” Rigsby said. “These young people are the future of our programs and we work to make sure they are getting taught properly. Our players and coaches take a lot of pride in working the camps. Sometimes I think our players enjoy it more than the campers. Both the boys and girls camps were great successes.”

Campers spent the week developing individual skills, working on fundamentals, games and competitions and team games at the end of the day. The process and repetition continued throughout the four-day camp.

“I had a great time and I learned a lot,” said 8-year-old Blake Bush, who won the shooting competition. “I love basketball and work at it so this was good and I learned things this week that will help me be a better player if I keep working on them.”

The point also was made with the girls’ camp.

“We learn a lot while we are here and we did a lot of things this week to become better,” said Katie Hoskins, who was selected as one of the four campers of the week by the CCHS players. “But we also learned that you have to practice and work on your game even when you are not at camp or practice. It was a lot of fun.”