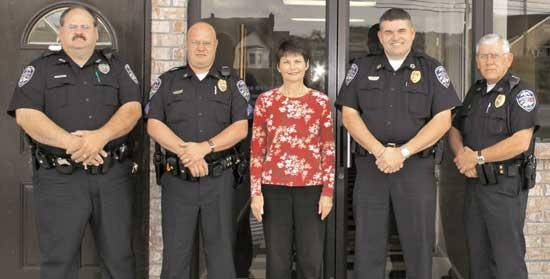 It was about his trip to Colorado to receive an award after the Woodbury Police Department received national recognition from the International Chiefs of Police. This got me to thinking, ever since Tony had been in that position, the department has received more grants and equipment under his leadership than just about anyone in that position here in Woodbury.

So I sat down with the Chief one recent afternoon at the police department on the west side of town to talk about his tenure as the head of the Woodbury Police.

I originally did the story of when he was first appointed to Chief of the Woodbury Police Department called “The First Ninety Days.” Chief Burnett took over on January 1, 2005. Even after ninety days he had put into action some of his changes. Following is a small excerpt in this column from that article.

“One of his accomplishments is the cleanup of some of the property inside the city limits. Chief Burnett says by far this had been the biggest single project taken on by him and his men; it is also a big success. Burnett says his department was successful in getting rid of 80 old and disabled vehicles that have caused not only eyesores for the city, but they are also health hazards. He continued the department has noted 150 violations and cited over 30 people into court and out of those people, only one is left and it is being appealed.”

Remember this was in the first ninety days. January 1, 2010 will be the beginning of Burnett’s sixth year as Chief. And his officers still enforce that city ordinance.

I wanted to find out from Burnett what he has accomplished since being in that office. Here is the list of what he feels is great accomplishments:

All the patrol cars that he has in the fleet right now are 2006 and newer. Only the first ones that he had purchased the first year came from Woodbury taxpayers, all the others have been either from grants or earned equipment fund or drug monies awarded to the city.

All vehicles have in-car computers, cameras (which are also computers in their own right) and they use digital technology which is integrated into the state of the art video equipment in the courtroom. This equipment can then be shown to attorneys and violators and the city judge on demand.

“This brings our courtroom up in the same league as any other department no matter what size they are” Burnett says.

This equipment did not cost the local taxpayers a cent.

Each officer has a crime scene kit and knows how to use them, and they are afforded any training school that will enhance the quality of the Woodbury Police Department. On that issue, Chief Burnett tells me that he cannot make any person interested in any one particular enforcement area.

“I cannot make them to be the best drug enforcer or traffic, or undercover officer, they have got to be interested in that first and want to do the things that interest them.

“So, if the officer feels his ‘forte’ would be in DUI enforcement then he will learn as much as he can to do the job, I try to put them where they are interested and more comfortable so they try to do the best they can,” Burnett said.

All the officers have their own fitted body armor for their safety. The department is also very proactive in public safety. It holds publicized checkpoints around the city for seat belt and sobriety checks.

Woobury offiers are also active with the high school students with a School Resource Officer (SRO) and they put on driving courses with the golf cart they got with grant monies. They utilize special goggles along with the cart which distort the vision of the teenagers at certain levels of alcohol consumption and intoxication. This makes the student aware of the hazards of drinking and driving.

All of the officers are certified in DUI enforcement. They are all issued the same weapon to use on duty. This is the best way that the departments have found to insure that any officer can use a fallen officer’s weapon or ammunition in case of a shootout. All their gear is provided by the department. The department already has a passive radar speed trailer that reminds people of the speed limit and gives them a reading of their own cars’ speed.

The reason for the latest Colorado trip for Chief Burnett was to receive a national award along with four other coordinators across the Cumberland Region. The award is given each year to a region across the United States and Canada for its efforts at highway safety. This is the second year in a row that Woodbury Police Department has received this award.

The state is divided into four regions and each region has a Law Enforcement Liaison and a number of coordinators depending on the size of that region. The coordinators are responsible for gathering statistics and organizing highway safety events in their area. Chief Burnett is in his fourth year as a coordinator.

“The State has seen a drastic decrease over the past two years in fatalities and continues to work hard at increasing seat belt usage and correct usage of child safety seats,” Burnett says.

The Woodbury Police Department is receiving a $25,000 grant this year for the position. This grant money can be used for equipment, overtime and other expenses. This year the department plans to upgrade its training and court room, replace and purchase equipment. They fully intend on participating in programs that make Tennessee roadways safe. The state has seen a drastic decrease over the past two years in fatalities and continues to work hard at increasing seat belt usage and correct usage of child safety seats.

In all, the police department has received approximately $220,000 over the past four years. This grant money has been used to purchase cameras, radar units, light bars, overtime, in-car and desktop computers, officer’s safety equipment, and other equipment related to highway safety.

Sergeant Kevin Mooneyham, Assistant Chief Darrell Young, Chief Tony Burnett, Patrolmen John House, Brent Brock, Brandon Gunter, Tracey Stoetzel and Lowell Womack. The Chief also has two reserve officers; these officers cannot perform any arrests unless accompanied by a certified officer. They are Frank Matthews and Chris Brown. Burnett says that the department rarely has any turnovers anymore; two of his recent “former officers” were appointed to the Tennessee Highway Patrol. Jason McGhee and Dwaine Jennings, Jennings was recently honored by the Department of Safety as the Trooper of the Year.

“That is what happens when you hire good qualified men in the beginning,” said the Chief.

And last but certainly not least in the list of police department employees is Anne Alsup. Anne is the departments’ secretary, who is affectionately known to some as “yes Mother Dear.”