ANNA PATRICK, Special to the Courier 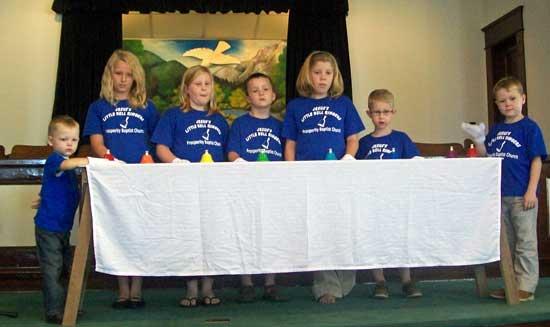 Jesus’ Little Bell Ringers
175 on the 175th Anniversary Celebration at Prosperity Baptist Church, Sunday, Septempber 12, 2010. At least that’s the “guesstimate” from our Kitchen Committee who had food spread over 35 feet of tables and that didn’t include the drink table!

What a great day it was when former members and pastors came together for a “family” reunion. Former pastors attending were Dr. James Hutchings, who delivered the morning message, with his wife, Jane, from Harrison, TN and Bro. Thurman Seber and his wife, Laura, who have recently made a move to Alexandria, TN.

The service began with the church choir performing “The Old Country Church” hymn which was very appropriate for this occasion. Throughout the service, they performed several more songs.

The Historical Committee of the Tennessee Baptist Convention honoured the church with a plaque and the trustees, administration and faculty of Union University of Jackson, TN sent a certificate of congratulations. There were also letters of congratulations from several former pastors.  Three current church members shared their “history” of the church and a few memories of times gone by.

Information taken from the old church record book says “Susanne David was in the organizations of the (Prosperity Baptist Church) church, 1835. It is an off spring of Salem Church and was established under the ministry of Elder John Fite who himself became one of the first sixteen members.

The church is located is located at the intersection of Highway 96 and Fites Lane in the southeastern corner of Wilson County, half way between Auburntown and Cottage Home. It is situated in a prosperous farming area on the bank of Smith’s Fork Creek. “They” say because of her location in a prosperous farming section, the church and also the community were named Prosperity.

Nothing of unusual character has occurred in the history of the church other than the loss of two buildings, the current building being the third structure. The first meeting house was located below the old road on the bank of the creek at the old saw mill place.

Bro. Grimes stated that this building burned. Another record said that it was torn down and a larger and better building was erected. The one-room building was constructed in 1885 during the pastorate of Elder J.H. Grimes at the cost of $1,200. This church was leveled by a tornado on January 24, 1928.

The current building was erected in 1928 and 1929 with dedication held May 12, 1929. It was constructed at the cost of $12,000 plus several other thousands of dollars worth of labor and material donated by the people with all debts paid by completion.

The women of the church sold all the eggs their hens laid on Sunday to help raise the money for rebuilding. A quilt that was on display during the anniversary celebration was made by several ladies of the church for the purpose of purchasing choir draperies. The quilt included the names of the current members at that time.

It has been necessary for this building to be expanded twice because of the need for additional space. Several years ago a group of Sunday School rooms were built across the back of the building. In the years 1976 and 1977 a Fellowship Hall plus additional classrooms, storage rooms and Kitchen were added to our current structure.

Until 1979 our baptisms took place in the Smith Fork Creek. The places used were “the Slab” adjoining the Alton Armstrong property behind the Riley Crook property and at the “Old Mill” adjoining the Jim Anderson property. Also used was the baptistry at Round Lick Baptist Church, Watertown First Baptist Church and Auburn Baptist Church. It was in the spring of the above year that our current baptistry was installed with the first baptismal service held April 22, 1979.

In 1980 a donation was made to Prosperity Baptist Church to begin and help support a Library.

Improvements and conveniences which have been added lately are: paving of the parking lot, installation of a new lighted sign, upgrading the sound system and replacing carpet with linoleum throughout the first floor with the exception of the sanctuary which had been carpeted a few years back.