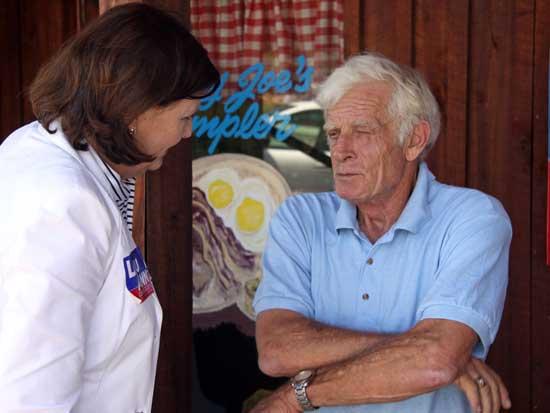 Lou Ann Zelenik talks with Jim Jones outside Joe's Place Friday.
“Joe the Plumber” (Samuel Joseph Wurzelbacher) is an Ohioan, so what was the average working man made famous overnight by “asking a question” during the previous Presidential election doing in Woodbury speaking on behalf of Lou Ann Zelenik’s campaign Friday?

Wurzelbacher says he has a vested interest in the upcoming Sixth Congressional District election for the U.S. House of Representatives and that’s why he was at Joe’s Place drumming up support for Zelenik, a Republican candidate.

“Anymore, what happens in Tennessee affects me,” Wurzelbacher said. “You have senators and congressman voting on laws that affect me in Ohio so I definitely have a part in Tennessee. Do I know all the politics that go on here? Absolutely not and I would be a liar if I said I did, but that’s not the point. The point is we have to get good Americans who will represent their area to Washington as opposed to status quo right now with Washington being represented to us. That has to stop.”

So why did “Joe the Plumber” opt to endorse Zelenik, as well as other candidates for the same primary?

“I did my homework and found out that she was the best,” Wurzelbacher said. “I am not going to tell you guys to vote for her, that’s up to you, but I did my homework. She will do a great job. I found out what she’s about and talked to Tea Party members. She wants to get something done and that’s why I’m here.”

Zelenik said “Joe the Plumber” is her “rock star.”

“He is my rock star because he asked a question and he dared to stand up to politics as usual,” Zelenik said. “He represents a lot of my base because they are fed up. We don’t need people to take care of us; we take of our own in Tennessee, but what we do need is the respect an the courage and principle of people to stand with us and do the right thing.”

The candidate said a letter she received from a senior citizen in Woodbury drives her daily.

“I received a letter about four months ago and it read, ‘I’m 83-years-old. I have lost my husband and for the first time in my life I’m really worried. Let our voice be heard. God Bless You! God Bless America,’” Zelenik said. “We are seeing more of this because people are concerned. People are fed up with the arrogance of politicians who think they believe better than the business owners, the job creators, who are on the front line each day.”

“Joe the Plumber” said he is not representing a Republican or Democrat when discussing Zelenik.

“I’m here to get a good American elected,” he said.

Print
Members Opinions:
[Delete]
Lou Ann is going to need more than Sam the Sham to win in primary---
Were there more than three that showed up?
[Delete]
Action not words, Like paying your taxes. Which he didn't do.

Maybe he could head up the Gulf Oil Spill Response Team?