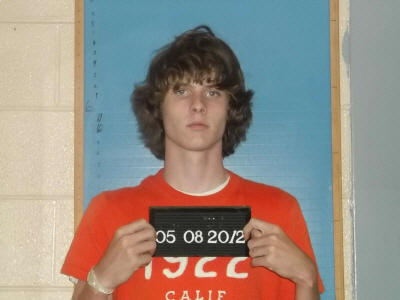 A foot chase, a man hiding in a downtown store and a search for a suspect’s vehicle ended up with one man being arrested on May 7.

The arrest resulted from an incident which started when Chief Mooneyham was dispatched to Cash Express on E. Main St. in reference to someone attempting to pass a forged check.

Upon entering Cash Express, Chief Mooneyham was informed the individual attempting to pass the check had left. He was then handed a check by one of the employees. The check belonged to Edgar Burks, also of 232 Rains Ridge Rd. He was also given the driver’s license of the individual who attempted to cash the check, which identified him as a resident of Hoover Mill Rd.

Chief Mooneyham was then approached by Burks’ daughter, who stated that her grandson, Kenneth Johnson, had taken the check out of her purse. She said Johnson came to her house accompanied by two other individuals. She said he wanted to borrow some money. She told him she thought there was some (money) in her purse and told him to look.

The next thing she knows, the witness said, is that an individual is calling advising her that someone is attempting to pass one of her father’s checks.

At this point Chief Mooneyham was advised by Dispatch that one individual was chasing another, and one of them had a shotgun. Chief Mooneyham went out of the store, but did not see anyone running or anybody with a shotgun. He was then advised by Dispatch that the individuals were running west on Main St. and that they were passing the Scoreboard Restaurant. He got into his vehicle and started in that direction. While enroute he was advised the two men had run inside Off The Hanger Consignment Shop.

Upon arrival there, Chief Mooneyham observed several people running around both inside and out of the business. As he opened the door, he was approached by Kerry Foster, who said he had chased an individual into the store, and that he was hiding somewhere. Foster said he had no idea who the person was. Foster also said there was no shotgun involved in the incident. Foster had been at Cash Express when Chief Mooneyham arrived there initially.

At this point Chief Mooneyham, Sgt. Lowell Womack and Cannon County Sheriff’s Deputies Reed Bryson and Eric Moss attempted to locate the individual inside the store. They found him hiding underneath a rack of clothes. He was ordered to come out of hiding and show his hands, but he would not comply. Chief Mooneyham reached in and pulled him out and he was handcuffed by Deputy Bryson.

When asked his name, the suspect stated he had the right to remain silent. He was told to roll over on his side so that he could be helped from the floor. He told the officers they weren’t taking him out (of the store).

As officers were escorting the man, later identified as Robert Matthew Dunn, out of the store, he started cursing and becoming more combative. They were eventually able to place him in Sgt. Womack’s patrol unit. Due to his emotional distress Dunn was transported to Stones River Hospital for evaluation.

Chief Mooneyham then returned to Cash Express, where he met again with Foster. Foster said he became involved when Cash Express called and told him that someone was there trying to pass one of his checks. Foster is Edgar Burks' son-in-law. He told them he was just around the corner and would be there in a moment if they could stall the person.

Foster said when he arrived at Cash Express the individual ran and he gave chase. Foster said at one point they were in the parking lot of McDonald’s and the individual (Dunn) pulled off his jacket as if he wanted to fight, and then took off running until he ran into Off The Hanger.

After he had finished gathering the information at Cash Express, Chief Mooneyham was informed Kenneth Johnson was driving a gray Chevrolet Z-71 with a temporary tag, and that another individual was with him. The chief began to canvass the town looking for the vehicle. He located it while it was turning from West Lehman St. onto S. College St., and proceeded to stop it on W. High St.

He approached the vehicle and by license identified the driver as Kenneth Johnson III. There were three passengers in the vehicle. When asked, Johnson denied any knowledge about the check. He said several people spent the night with him and anyone could have taken it.

Further investigation revealed that Johnson approached Dunn at McDonald’s and allegedly asked him to cash the check and that he would pay him $50 for doing so. Johnson was then placed under arrest for Forgery and Criminal Attempt Theft.

Chief Mooneyham started the process of having Johnson’s vehicle towed. He asked Deputy Moss to run his K-9 officer around the car to see if it alerted to narcotics. The K-9 alerted to the driver’s side as well as the rear of the truck. A search uncovered a pair of brass knuckles in the driver’s door pocket.