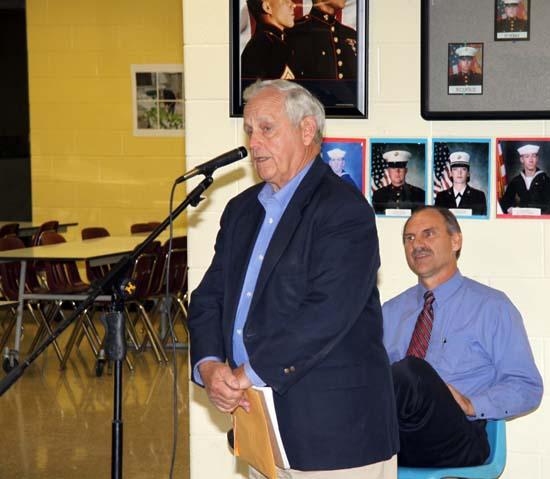 Incumbent Stratton Bone, standing, is hoping to fend off the challenge of Mark Pody, seated, for the Tennessee 46th District House seat.
Political newcomer Mark Pody is hoping to ride the wave of general dissatisfaction among voters with incumbents to victory over veteran Tennessee legislator Stratton Bone in the Nov. 2 State General Election.

"It is time for a new day to dawn in the 46th district," Pody said. "We need less regulations and less taxes and the jobs will come."

Bone has represented the 46th District, which includes Cannon County, in the Tennessee State House of Representatives since 1997.

"The major issue facing the 46th District and Cannon County now and the next two years is industrial recruitment, jobs," Bone said.

Bone has worked as a farmer and in residential construction. He has also served in the Tennessee Air National Guard, but is now retired.

Bone earned his AA from Cumberland University in 1958. He went on to receive his BS in Agriculture from the University of Tennessee in 1961. He is chairman of the Agriculture Committee in the House of Representatives.

During his term in the General Assembly, Bone has been a strong supporter of farmers, teachers and state employees.

"I believe that my experience in local government and working with the different state departments and agencies is a benefit to our community and my service to the district," Bone said. "As a member of the General Assembly, I am qualified to serve the people of the 46th District. I will continue to use my contacts throughout the state to enhance the lifestyle for the people of our community."

Pody, the owner of a small business which specializes in financial planning and insurance solutions, has been a resident of Wilson County for 25 years.

He believes Bone has spent too much time worrying about the welfare of state government, and not enough finding new business for the district and helping those which are already here grow.

"The most critical issue facing the 46th District is how can we get good jobs here," Pody said "We currently have around 10 percent unemployment in our district. The way we can solve this is through private business growing and hiring new employees.

"Government is not the way to create jobs. Any jobs government creates are paid for by you and I. We need to address this situation in two ways. First, the businesses could get an incentive to hire new employees. This would also help stop some of the jobs that are leaving our area. Next, I know what it takes to get businesses to relocate to our area. We have a quality workforce here. We just need to give everyone an opportunity to work."

Pody also wants to take a hard look at reforming and eliminating some of the state's programs to help make up part of the estimated $1.5 million budget shortfall projected for the next fiscal year.

"The other concern we have is our budget," Pody said. "I have paid the increasing taxes and fees government continues to place on the backs of its citizens. I believe this tax burden has reached and exceeded the limits taxpayers can bear. I believe the current budget shortfall in the state should be met by prioritizing Tennessee's needs and not raising Tennessean's taxes. Some programs need to be made more efficient and ineffective programs need to be eliminated."

Print
Members Opinions:
kane
[Delete]
I like Mr. Pody's ideas on the budget. Our State government has got to stop spending money it doesn't have and realize that State Revenue does not just fall out of the sky. Taxpayers are pushed to the limit now. I agree the way to get jobs is to stop increasing taxes and regulatiions on small businesses and then they can expand and start hiring people again.
dougjenn
[Delete]
Stratton Bone is the best representative Cannon County has ever had.
bullpen
[Delete]
Stratton Bone lied to us when he said he would not vote for a state income tax and just because he buys the votes of the right groups of people it doesn't make him the best representative. We as a community have to stop asking for handouts and then complaining when our government spends too much money.
[Delete]
Statton bone has proven himself over and over that he is a responsible representative for Cannon County. With the exception of Jim Cummings, Stratton Bone is the best representative we have had here. We know what Stratton can do; we don't know what Pody can do.
Bob Stoetzel
lionbasketball
[Delete]
I'm tired of hearing Pody's negative campaigning as well as pulling it out of my mailbox. Stratton Bone has my vote.
spatrick
[Delete]
Stratton Bone represents our county so well.
We are now getting our share of grant money thanks to him. WE see him in our small county at least weekly. He understands us and our needs. He works for us. He is trying to attract industry to our county while supporting agriculture.
ftenpenny
[Delete]
Bone voted 2 times for a state income tax, an voted against a law requireing jailers to check legal status on people arrested for crimes.If allowed to stay in his current position sooner are later he will get the income tax law passed.SEND BONE HOME.we know he don't beleive in term limits,an does believe in more Taxes
dailyreader
[Delete]
Both men have jobs as the number one priority and rightly so...perhaps it is asking too much of the buying public to select products made in the USA.
Why not a car not only assembled in the USA but containing parts mostly American made--no, too much money, very well then give a job to someone in another country.

rachel
[Delete]
OK, another democrat that this independent will vote for. Mr. Bone has represented Cannon County well.