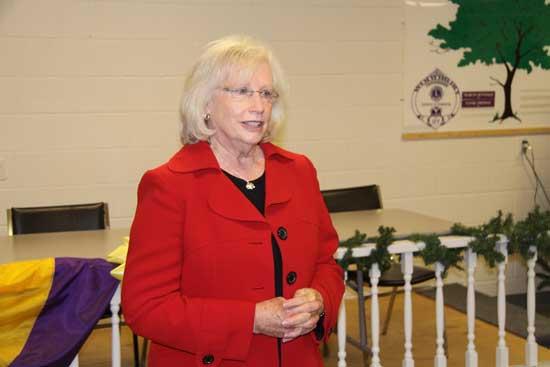 State Sen. Mae Beavers speaks to constituents during a Meet and Greet at the Woodbury Lions Club, Dec. 2.
Mae Beavers spent eight years in the Tennessee House of Representatives, and she has spent as many serving as a state senator.

Still, there will be somewhat of a different feel when Beavers (R) is sworn in as the 17th District State Senator Jan. 15.

“This is something I’ve never seen before in the years I’ve been in office,” Beavers said. “Just the fact that we are going to have a Republican Governor (Bill Haslam), a Republican House, a Republican Senate; I think I am still in shock. I am really anticipating what we can do being in charge and the good pieces of legislation we can pass and what we can do to maybe cut the waste out of the budget so that we have the money to do what we need to do.”

Beavers and newly-elected Tennessee House of Representative Mark Pody (R) were in Woodbury for a meet and greet with citizens at the Woodbury Lions Club Building Thursday (Dec. 2). They told those in attendance they are ready to get to work and start accomplishing goals that will benefit citizens in their district.

Pody will not be sworn in until Jan. 15, but he said he already is working to bring new businesses to Woodbury.

“The first thing I have been doing is contacting companies,” Pody said. “I have a company I am bringing to visit Cannon County. They want something between 9-to-10,000 square foot in warehouse space for a factory and such. Shirley (Borren) has been nice enough to take me around to different places and I was able to take pictures and send them back so the business can get a head start on what we have to offer.

“I don’t know if we can get them. They have been looking in middle Tennessee but we are trying to get them to look at Cannon County.”

Pody also said he will be in Cannon County at least once a month for the next two years so constituents can meet with him regarding concerns they may have, rather than having to come to Nashville.

“I will be coming to Cannon County every third Friday for the next two years,” Pody said. “I am still working on the location but I will be at the same place every third Friday at 1 p.m. so any constituent can talk to me about anything and not have to do to the state. I also have a temporary office right now and my phone number there is (615) 741-7086. I have an assistant there every day answering calls and helping constituents with what they need.”

Pody, who represents the 46th Tennessee House District, already has put his name in the hat to be considered for various committees, most notably Agriculture and Commerce.

“I want to say Mr. Stratton Bone served well and has done a lot for Cannon County, and we should appreciate that,” Pody said. “I have asked to be on Agriculture and Commerce committees. This district is a huge agriculture district so I believe that would be an important committee for me to be on.”

Beavers said the excitement of several new faces and ideas is building as the inauguration approaches.

“I’m very happy for Mark (Pody) and what he has to offer,” Beavers said. “It is always exciting with the new members coming in and just being sworn in again after our elections. This year there is extra excitement with Gov. Haslam coming in on Jan. 15 for the inauguration. That is always an exciting part of history in which we get to participate.”

And then the business of rolling up the sleeves and getting to work takes place.

Beavers and Pody say they are more than ready to begin the process of making a difference within their district and throughout Tennessee.

Print
Members Opinions:
dailyreader
[Delete]
Looked like a fairly sedate meeting. None of that holy roller stuff like back in October.

[Delete]
I wish you could have been there dailyreader. I looked for you, but you stood me up. I saved you a dance and everything. Oh well, maybe next time.

We had good barbeque and some good talk and I look forward to Mark working for the people of Cannon County.