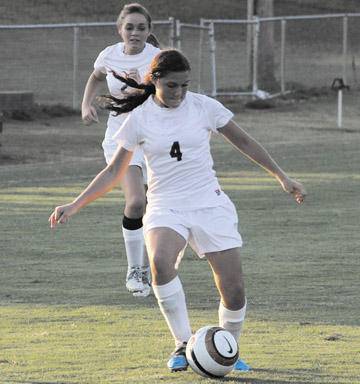 Macy Williams scored a hat trick with all three goals in the win at York.

Cannon County’s soccer team has piled up the goals during its recent competition, winning 3-2 at York and 3-2 at Macon County. The Lionettes also scored three goals against DeKalb County, but suffered a 4-3 setback.

Macy Williams recorded a hat trick with all three goals in the win at York.

Erin McReynolds continued to cause problems from her forward position and was strong attacking the ball. Olivia Walker, who leads the team in goals with seven, was triple teamed most of the match.

Walker bounced back in Cannon County’s win against Macon County. She collected her eighth goal of the season in the 3-2 victory. Macy Williams added another goal, giving her six, and Molly Williams connected for the game winner with 30 seconds remaining as a balanced Cannon County attack was too much.

Erin McReynolds and Bailey Sims led a strong defensive effort for the Lionettes . Cannon County’s defense has been consistent overall throughout the season.

Cannon County also had a strong showing against always tough DeKalb County, putting a strong comeback together before falling 4-3. Walker registered another hat trick with three goals against the Lady Tigers, bringing her total to 11 on the season.