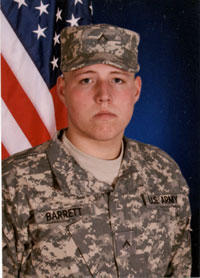 Two grenades came over a wall during an attack and Nick was hit by shrapnel in his arm, leg and all along his side. While severely injured he had to walk half a mile back to camp.

He is recovering in Afghanistan and will be returning to duty.

Nick is the son of Brent Barrett of Murfreesboro and Theresa Carter of Christiana. Grandparents are Judy Loy of Woodbury and James H. Barrett or Woodbury. Great Grandparents Darla and Harry Smith and the late Hershel and Mattie Jane Tenpenny.

Nick had  only been in Afghanistan about four weeks when he received his injuries, and has just learned that his nine months deployment will be extended to 12 months.

Print
Members Opinions:
cherleader
[Delete]
To Nick Barrett and Family, Sending prayers your way, Thank you for keeping our community and families safe here. We saw your story on the news and you are very lucky to have such great parrents, they are very proud of you!!!
[Delete]
PFC Barrett thank you for serving and keeping our country free.
James Adkins
CHEVY
[Delete]
GOD BLESS YOU AND ALL OF THE OTHER SOLDIERS FIGHTING OVER THERE
[Delete]
PFC Barrett, I am praying for your speedy recovery and for God to lay a healing and protective hand on your shoulder while you are deployed. THANK YOU for all you do to protect us here in the U.S. And to your family-I am praying for you all too! And THANK YOU! May God bless you all and all our troops!
proudmom
[Delete]
i am PFC barretts mom i want to thank everyone for the nice comments please everyone pray for him and the other soldiers they need it to keep there spirits up he says hecan feel God around him so all the prayers are working. im so proud off the man he has become so strong and so brave.