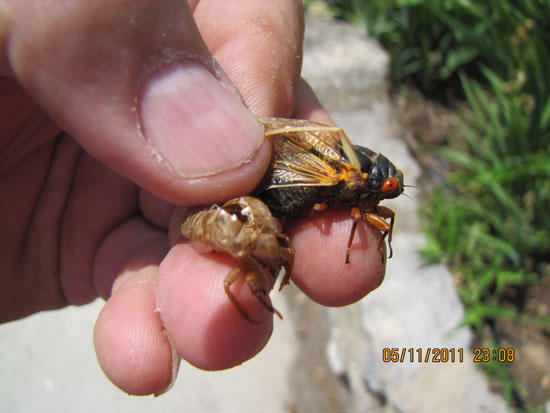 Brood XIX of the 13-year periodical cicada has already started to emerge in Cannon County, according to the local UT Extension office.

The mass emergence in other areas of the state (primarily Middle Tennessee) could occur as early as this weekend. Young fruit trees are particularly susceptible to damage from the oviposition (egg laying).

It is prudent to delay pruning fruit trees until after cicada emergence so damaged branches can be removed and proper branch scaffolding established. When possible, small shrubs and trees should be wrapped with a light breathable fabric such as cheesecloth or spun row cover for protection from ovipositing cicadas in May and early June.

Insecticide sprays have not been an effective option in preventing egg laying damage to plants from female periodical cicadas. When they land on an insecticide-sprayed host plant, they can cause some egg-laying damage before they are killed by the insecticide residue.

The high number of female periodical cicadas laying eggs over a period of several weeks will cause cumulative damage to plants whether insecticide is used or not. The Extension fact sheet on periodical cicadas is found at: http://utextension.tennessee.edu/ publications/Documents/SP341-F.pdf. (FH)

Print
Members Opinions:
JeffSchuler
[Delete]
Unless your fruit trees are very young saplings and in an area of extreme cicada density any damage will be nominal...

Periodical Cicadas need mature trees to feed on and most egglaying will be on older trees...

Netting around saplings is all that's required here...

It is a brief event with no lingering impact to your Trees..