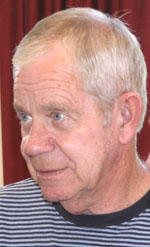 HAROLD PATRICK
Harold Patrick announced today that he is ending his tenure as Cannon County Clerk and Master.

Patrick said he submitted his letter of retirement to Chancellor Robert Corlew on Monday. He said his retirement is effective June 30, but he has offered to work for a few days past then until his replacement is named.

The position will be advertised in the next issue of the Cannon Courier, Patrick said, adding that Corlew will be seeking applicants for the position.

Patrick said he anticipates a large number of people to apply for the job, which pays $56,000 annually.

Patrick, who is also the current mayor of Woodbury, said he will continue to serve in that position. "This decision will give me the opportunity to put in more time as mayor," he said.

Patrick began as Clerk and Master on Sept. 1, 1997. He is retiring just shy of 34 years of service in county government, including over nine years and a county commission and 11 as county executive.

"It's time," Patrick said of his decision to retire as Clerk and Master. "My grade school principle, Zola Lester, told me at her retirement, 'when the time comes to retire, nobody will have to tell you, you'll know it.' I'm 64. Nobody had to tell me it's time."

Patrick said he has enjoyed working as Clerk and Master and really appreciates the support he has received from Chancellor Corlew.

"It has been a pleasure working with him and all of the people at the courthouse," Patrick said. "I will really miss them."

At the top of the list of those he will miss is Dana Davenport, his long-time assistant in the Clerk and Master Office.

"She has been here as long as I have and she has been a good and trusted employee the entire time."

Office of Clerk and Master

The Clerk and Master is appointed to his office by the Chancellors and is charged with all the clerical and administrative duties conferred upon all elected clerks of court in Tennessee and is further authorized by statues, by the Local Rules of Practice and by Court Order to serve as a Master in Chancery for the 16th Judicial District.

The Clerk and Master is required to discharge and perform the duties of his office diligently, honestly, impartially, courteously and efficiently. The Clerk and Master employs deputy clerks to assist the office in opening new cases, maintaining the Court files and records, setting the docket and providing support to the Chancellors during hearings on matters brought before the Court.

The Clerk and Master is the principal administrative aide to the Chancery Court, providing assistance in the areas of courtroom administration and records management, docket maintenance, revenue management, maintenance of court minutes, official communication, and various other court-associated duties. The Clerk and Master is appointed by the Chancellor for a six-year term pursuant to the state constitution.

curtisf
[Delete]
Harold, you have been a terrific public servant. Your professionalism and availability to my classes has been most appreciated. Even though you are "retiring" from Clerk & Master, I will still invite you to speak to my classes. Congratulations!William F. Curtis - US Government Teacher - Cannon County High School