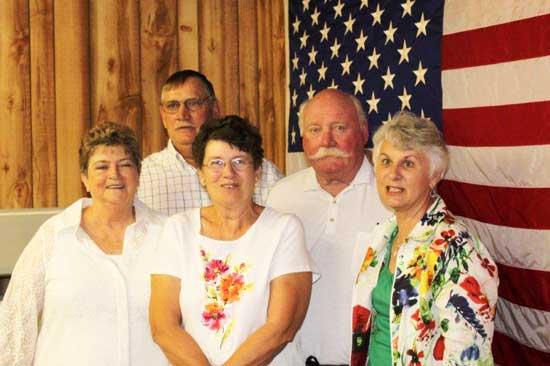 Joining the more than 200 attendees at the 2010 Auburn School Reunion were members of the 1960 Senior Class: Front: Eldra Dunn Alexander, Betsy Dutton Leach, and Stacy NIxon Vance. Back Row: Charles Robert Jones and Barry Kenneth Gaither.
There were loud voices and screams in Auburntown on Saturday afternoon June 12, 2010; however, Auburntown Volunteer Fire Department Chief Chris Blackburn did not respond.

Instead, he kept on frying eighty pounds of fish in addition to chicken and all the trimmings for the more than 200 attendees of the 2010 Auburn School Reunion. Classmates, teachers, and others joined together as comrades at the Auburntown Community Center.

Mixing and mingling between old friends highlighted this special gathering where old friends shared stories and recalled their “Glory Days” at Auburn School.

“This was a well attended Y210 reunion,” remarked promoter Mary Anna Patrick. “It has been held every five years since Y2K but the ten year mark seems to bring more folks out.” Many school friends did not recognize each other but immediately were hugging and laughing when names were discovered.

“I think everyone recognized me, “said Stacy Nixon Vance who graduated in 1960. One might say she could have been voted the “most original” in appearance. Her classmate Eldra Dunn Alexander, whom many did not recognize, announced she was feeling “great” after having been blessed with a new pace maker.

In addition to Tennessee, five states were represented by those at the reunion including Georgia, Missouri, Minnesota, Alabama and New York.

Susie Robinson Kennedy captured the honor of being the earliest graduate with a graduation date of 1939. She attended with her son Greg Kennedy, class of 1969, who recently retired to Auburntown.

“Miss Bess” Finley was a popular guest who taught students at Auburn High School for eighteen years. She began teaching in 1954 and reminded everyone that for several years she also served as basketball coach.

Another basketball coach from 1959 through 1962, Milan Davenport (1951), attended with his wife Elizabeth Duggin Davenport.

It was an amazing flashback for those attending the 2010 Auburn School Reunion. Sharing recollections and renewing friendships was a fun time just as those years spent together at Auburn School.