SARAH FRYAR, Special to the Courier 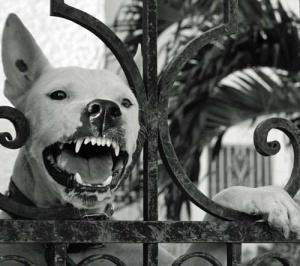 While some of us may apply the complex phrase to different situations in life, others specifically postal carriers, just appreciate its simplicity.

National Dog Bite Prevention Week is May 15-21 and to help promote the awareness campaign the United States Postal Service has released the nation's top 10 cities where the most dog attacks occurred last year.

"Houston tops the list with 62 letter carriers attacked in 2010. Nationwide last year, 5,669 postal employees were attacked in more than 1,400 cities," said an official statement from USPS.

Although Murfreesboro and Nashville have made quite a few national top 10 lists recently, the pair missed the cut on this one.

However, the Volunteer State does have a representative in the top 25.

The Bluff City clearly takes first place in Tennessee, but the numbers for the rest of the state have yet to be released.

"A large breed dog… literally jumped up and I think I screamed so loud that he stopped in mid-air because all I saw was teeth. I think my scream shocked him so that dog did not bite," Barnett said good humouredly. "But I had another occasion where a dog just bee-lined to my leg and chomped. So I know first hand, though it was many years ago, that it's a frightful experience that certainly no carrier or individual would want to go through."

However, it does happen at an alarming rate.

Canines attacked more than 4 million Americans last year, the majority of whom were children, elderly and postal workers.

And it doesn't just affect the victims, dog attacks reportedly accounted for more than one third of all homeowners' insurance liability claims paid out in 2010, totaling $413 million.

As a result, the American Veterinary Medical Association suggests the following tips for the general public as well as pet owners.

How to Avoid Being Bitten

• Don't run past a dog. The dog's natural instinct is to chase and catch you.

• If a dog threatens you, unlike Barnett, don't scream. Avoid eye contact. Try to remain motionless until the dog leaves, then back away slowly until the dog is out of sight.

• People choosing to pet dogs should obtain permission from the owner first and always let a dog see and sniff them before petting the animal.

• If you believe a dog is about to attack you, try to place something between yourself and the dog, such as a backpack or a bicycle.

How to Be a Responsible Dog Owner

• When a carrier comes to your home, keep your dog inside, away from the door. in another room.

• Dogs can be protective of their territory and may interpret the actions of letter carriers as a threat. Please take precautions when accepting mail in the presence of your pet.

• Spay or neuter your dog. Neutered dogs are less likely to roam and bite.

• Dogs that receive little attention or handling, or are left tied up for long periods of time, frequently turn into biters.