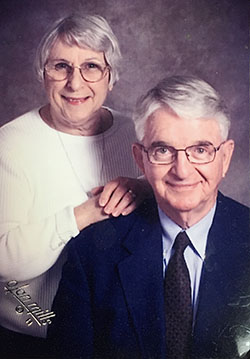 Dean Richard More passed away peacefully at Redmond Hospital in Rome, Georgia on Friday, January 19th, 2018 after a decline in his health following several strokes. He was 82.

Born November 18th, 1935, in Blue Earth, Minnesota, Dean graduated from Blue Earth High School. Following a term of service in the United States Marine Corps, Dean married Patricia "Pat" McClain on September 11, 1955, and began what would be a lifelong career as a salesman, which took the family across the country, where they lived in such places as Oregon, California, and Texas before settling for many years in Indiana and later Tennessee. Dean was everything you might imagine a self-made man to be: driven, hardworking, proud of his family, and loyal to both his church and his country. His hobbies included photography, acquiring his private pilot's license and traveling extensively in his Bonanza A36, as well as keeping the grounds of every home he owned groomed to perfection. In his retirement years, he kept busy doing private business consulting and moonlighted as the "hotdog man" - selling hot dogs from a mobile cart at social events in and around middle Tennessee. He will be remembered well by his friends and family as a pragmatic man who never backed down from a strongly felt personal conviction, and one who, although generous, made it a point to encourage every child and grandchild at the dinner table who wanted seconds to "take all you want, but eat all you take."

Survivors include daughters Reba and Paige, seven grandchildren, and three great-grandchildren. He was preceded in death by his wife of 62 years, Pat, one grandchild, and most of his kin.

Dean will be laid to rest in a private ceremony at the Center Valley Cemetery in Chatsworth, Georgia on February 24th, 2018.